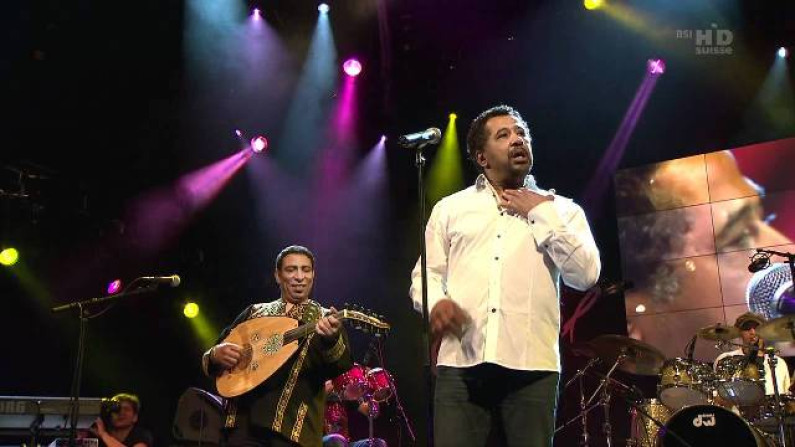 He began recording in his early teens under the name Cheb Khaled (الشاب خالد, Arabic for “Young Man” Khaled, as opposed to the traditionalist Sheikh elders) and has become the most internationally famous Algerian singer in the Arab world and across many continents.

His popularity has earned him the unofficial title “King of Raï”. His most famous songs are “Didi”, “Aïcha” and “C’est la vie” as well as “Alech Taadi”, which was prominently featured in the feature film The Fifth Element.

Khaled Hadj Ibrahim was born in 1960 in Oran’s Eckmühl neighborhood, Algeria. At the age of 14, he founded the Cinq Étoiles (Five Stars) band and started performing in nightclubs and at weddings.

In the 1980s, Khaled started producing and singing raï songs. He moved to France in 1986.

On 12 January 1995, Khaled married Samira Diabi, 27, with whom he has four daughters and one son.

In 1998, the documentary Khaled: Derrière le sourire was produced, recounting his life.

He was awarded Moroccan citizenship in August 2013, which he didn’t ask for but accepted because he felt he could not refuse.

Khaled’s signature song, the 1993 hit “Didi”, became extremely popular in the Arabic-speaking countries and also in several other continents, including Europe, where it entered top charts in France, Belgium and Spain, and in Asia, including India and Pakistan. The song was also used in a Bollywood films Shreeman Aashiq and Airlift and a Mollywood film titled Highway.

Khaled and producer Don Was appeared on The Tonight Show on 4 February 1993.The latter track, which saw heavy rotation on MTV Europe, climbed to fourth on the charts in Germany. Known as the “King of Rai”, Khaled is a winner of numerous awards, and has sold over 80.5 million albums worldwide including 10 diamond, platinum, and gold albums.

In 2010 he performed Didi at the opening ceremony of the 2010 FIFA World Cup in South Africa, making him one of the best selling Arabic language artists in history.

Khaled’s music also experienced great popularity in Brazil, on the late 90’s and early 00’s, greatly due to the usage of some of his songs in TV shows. In 2012 Khaled’s album C’est la vie sold more than one million copies in the European market alone after only two months and sold 2.2 million copies in the Middle East and North Africa, as well as 200,000 in the United States, for an estimated 4.6 million worldwide sales.

With a record million downloads of the hit single “C’est la vie” on European and Canadian iTunes, the album reached number 5 on the Billboard top France Songs.

The album contains a message of tolerance, love and peace, staying away from the themes of conflict that many other artists in the Arab world explore. Khaled tried to convey what Algerian immigrants suffer in Europe through the album and believes this is the reason behind the album’s huge commercial success.

C’est la vie was Khaled’s first album after a five-year break from recording during 2011 presidential elections in France and the Arab Spring.