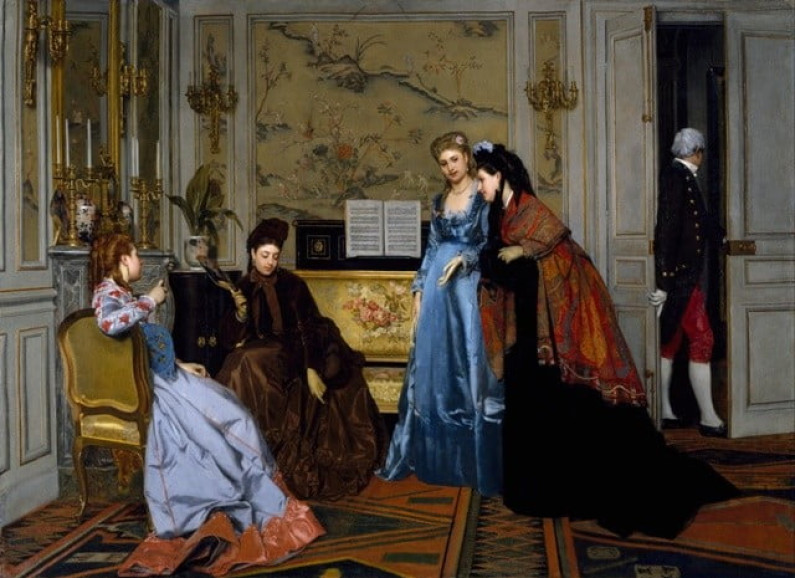 Alfred Émile Léopold Stevens (11 May 1823 – 24 August 1906) was a Belgian painter, known for his paintings of elegant modern women.

His father, who had fought in the Napoleonic wars in the army of William I of the Netherlands, was an art collector who owned several watercolors by Eugène Delacroix, among other artists.

His mother’s parents ran Café de l’Amitié in Brussels, a meeting place for politicians, writers, and artists. All the Stevens children benefited from the people they met there, and the social skills they acquired in growing up around important people.

After the death of his father in 1837, Stevens left middle school to begin study at the Académie Royale des Beaux-Arts in Brussels, where he knew François Navez, the Neo-Classical painter and former student of Jacques-Louis David who was its director and an old friend of Stevens’s grandfather.

Following a traditional curriculum, he drew from casts of classical sculpture for the first two years, and then drew from live models.In 1843, Stevens went to Paris, joining his brother Joseph who already was there. He was admitted to the École des Beaux-Arts, the most important art school in Paris.

Although it is said that he became a student of its director Jean Auguste Dominique Ingres, this is likely not true. An early picture by Stevens, The Pardon or Absolution (Hermitage, St. Petersburg), signed and dated 1849, shows his mastery of a conventional naturalistic style which owes much to 17th-century Dutch genre painting.

Like the Belgian painter and friend with whom he stayed in Paris, Florent Joseph Marie Willems (1823–1905), Stevens carefully studied works by painters such as Gerard ter Borch and Gabriel Metsu.

Stevens’s work was shown publicly for the first time in 1851, when three of his paintings were admitted to the Brussels Salon. He was awarded a third-class medal at the Paris Salon in 1853, and a second-class medal at the Universal Exposition in Paris in 1855.