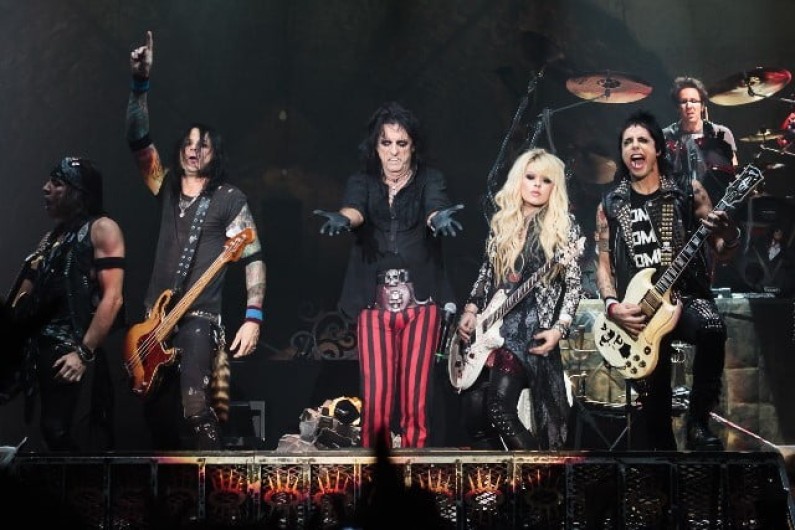 Alice Cooper was an American rock band made up of Michael Bruce on rhythm guitar and keyboards, Glen Buxton on lead guitar, Dennis Dunaway on bass guitar, Neal Smith on drums, and vocals by Vince Furnier, who legally changed his name to Alice Cooper and has had a solo career under that name since the band became inactive in 1975.

The band was famous for their elaborate, theatrical shock rock stage shows.

After several years of little success the Alice Cooper band rose to fame in 1971 with the success of the single “I’m Eighteen” and the album Love It to Death, and peaked in popularity in 1973 with the album “Billion Dollar Babies” and its tour, which broke box-office records previously held by the Rolling Stones.

The band consisted of members, all from the previous 60s garage rock band, the Spiders. They created everything as a group and wrote virtually the lion’s share of what was to become the classic Alice Cooper canon.Neal Smith’s sister Cindy Smith Dunaway (Dennis Dunaway’s wife) designed the bands costumes and also performed in the stage show (she was the “dancing tooth” during the band’s Billion Dollar Babies tour).

The Alice Cooper band was the subject of media criticism after Furnier (Alice Cooper) threw a live chicken into the audience during the 1969 Toronto Rock ‘n’ Roll Revival Festival. The audience ripped the chicken to shreds.