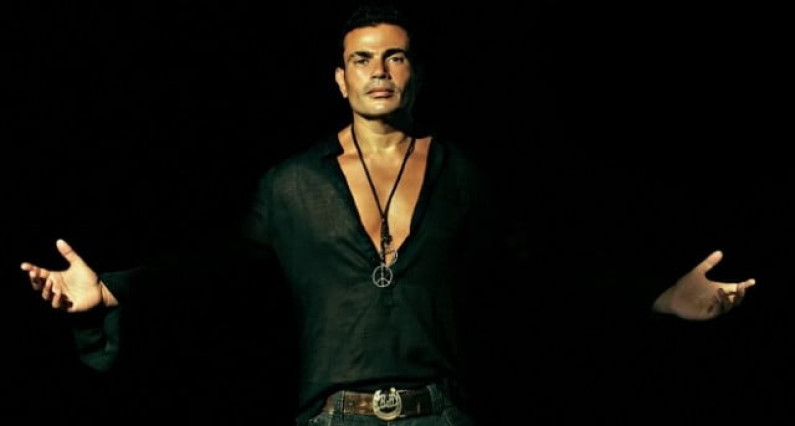 Shocking everyone with his amazing voice and singing talent, he was rewarded with a guitar from the governor of Port Said for his excellence.

After being awarded the guitar, Diab saw this as his shot to fame, and continued his life singing and pleasing people with his voice through his teenage years. Diab had earned his bachelor’s degree in Arabic Music and graduated at the Cairo Academy of Arts in 1986.

Diab entered the musical arena and introduced his first album Ya Tareea in 1983. He followed with several additional albums: Ghanny Men Albak (1984), Hala Hala (1986), Khalseen (1987), Mayyal (1988), Shawa’na (1989) and Matkhafesh (1990). Diab was chosen to perform and represent Egypt at the 5th Tournament of African Sports in 1990 where he sang in mostly in Arabic, but also in English and French.

Diab released the album Weylomony in 1994, and officially established himself as a super star of the Arab world with the launch of Rag’een in 1995 and the popular Nour El Ein album in 1996 which achieved many music awards.

He then followed with Awedony in 1998. Diab made a breakthrough with his hit Amarain album in 1999. He performed duets on this album with Algerian-French based Cheb Khaled (on the song “Alby”) and with Greek Angela Dimitriou (on the song “Bahebbak Aktar”).

Diab has achieved the World Music Awards twice as best selling Middle Eastern singer, with his albums Nour El Ain in 1998 and Aktar Wahed in 2002. He also received a Platinum Award for the sales of Nour El Ain. The summer of 2004 witnessed the release of the Leily Nehary album.

September 2011 saw the release of his album Banadeek Taala, produced by Rotana. Amr Diab composed 9 of the 12 songs on this album. On February 2011, Amr Diab released his hit single “Masr Allet” (Egypt spoke). The song was released during the 2011 revolution in Egypt and was dedicated to the martyrs of the revolution.

In 2012, Diab hosted the first Google Hangout in the Middle East during his performance in Dubai. Ten winners had the chance to speak live with Diab. Diab launched his “Amr Diab Academy” in 2012 on YouTube.

The program searched for singers from all over the world. Thousands of applicants were submitted, and at the last stage two winners were announced: Mohanad Zoheir and Wafae Chikki joined Diab, signing a duet in his Egypt concert in 2012.

In 2013, Diab had his Golden Tour, celebrating 30 years of success. The tour began in Australia and continued in Qatar, Dubai, Egypt, Greece, and Romania.

On August 2013, Diab released the El Leila album which was the number one selling album in the world category in iTunes and Rotana. Diab released his music video “El Leila”, which was shot in Greece, and the music video made more than 10 million views shortly after its release.

According to author Michael Frishkopf, Diab has produced a new concept of Mediterranean music, especially with his international hit, “Nour El Ain”.