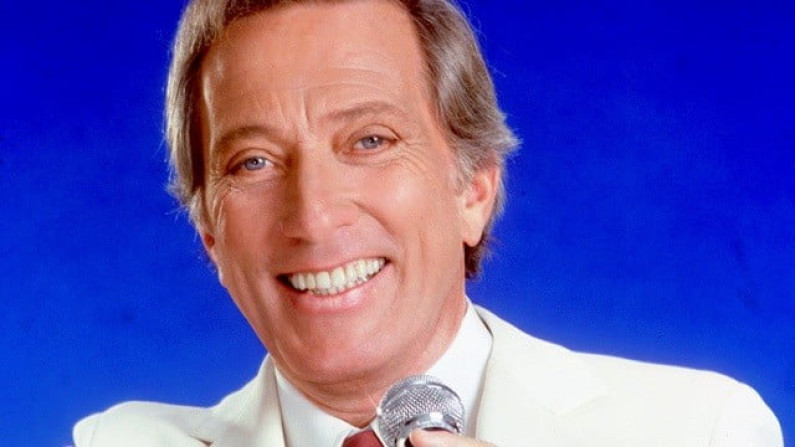 He hosted The Andy Williams Show, a television variety show, from 1962 to 1971, and numerous television specials. The Moon River Theatre in Branson, Missouri is named after the song he is most known for singing—Johnny Mercer’s and Henry Mancini’s “Moon River”.

Williams was born in Wall Lake, Iowa, the son of Jay Emerson and Florence (née Finley) Williams. While living in Cheviot, Ohio, Williams attended Western Hills High School in Cincinnati, Ohio; he finished high school at University High School, in West Los Angeles, because of his family’s move to California. He had three older brothers—Bob, Don, and Dick Williams.

Williams’s first performance was in a children’s choir at the local Presbyterian church. He and his brothers formed The Williams Brothers quartet in late 1938, and they performed on radio in the Midwest, first at WHO, in Des Moines, Iowa, and later at WLS, in Chicago, and WLW, in Cincinnati.

The Williams Brothers were signed by Metro-Goldwyn-Mayer to appear in Anchors Aweigh and Ziegfeld Follies (1945) but, before they went before the cameras, the oldest brother, Bob, was drafted into military service and the group’s contract was canceled.

Kay Thompson, a former radio star who was now head of the vocal department at MGM, had a nose for talent and hired the remaining three Williams Brothers to sing in her large choir on many soundtracks for MGM films, including The Harvey Girls (1946). When Bob completed his military service, Kay hired all four brothers to sing on the soundtrack to Good News (1947).

By then, Thompson was tired of working behind the scenes at MGM so, with the four Williams boys as her backup singers and dancers, she formed a nightclub act called Kay Thompson and the Williams Brothers.