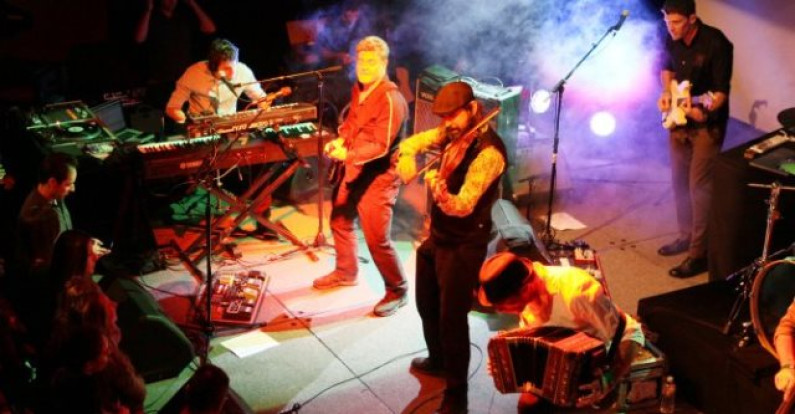 Bajofondo is a Río de la Plata-based music band consisting of eight musicians from Argentina and Uruguay, which aims to create a more contemporary version of tango and other musical styles of the Río de la Plata region.

It was founded in the early 2000’s as a studio experiment, which culminated into the successful album Bajofondo Tango Club. This led to touring and eventually to the current lineup. Bajofondo calls itself a collaborative as all members have solo careers as well.

The group has toured around the world, particularly in Latin America, the United States, Europe and parts of Asia. Their music is known to a wider audience than those who know their name as their music has been used in film and television.

The name alludes to the river that separates Argentina and Uruguay politically but unites the area as a region, called Rio de la Plata. The music has been called “electrotango” or “electronic tango” but leader Gustavo Santaolalla does not believe that it sufficiently describes the group’s sound, stating there is more than that. Tango is an influence but it not the band’s style.

The Argentine-Uruguayan influence is more than just tango, and includes murga, milonga and candombe. The idea of the group is to take these traditional styles and create something more contemporary, with elements from rock, hip hop, jazz and electronic music, especially sampling.

Bajofondo calls itself a collective, rather than a band, where members work on both projects under the Bajofondo name and on individual projects, often in collaboration with one or more other members.

There are eight members, seven musicians and one VJ, who gives a theatrical aspect to live performances, by adding digital images in real time to the music. Each member has their own solo career, and lives in different places.