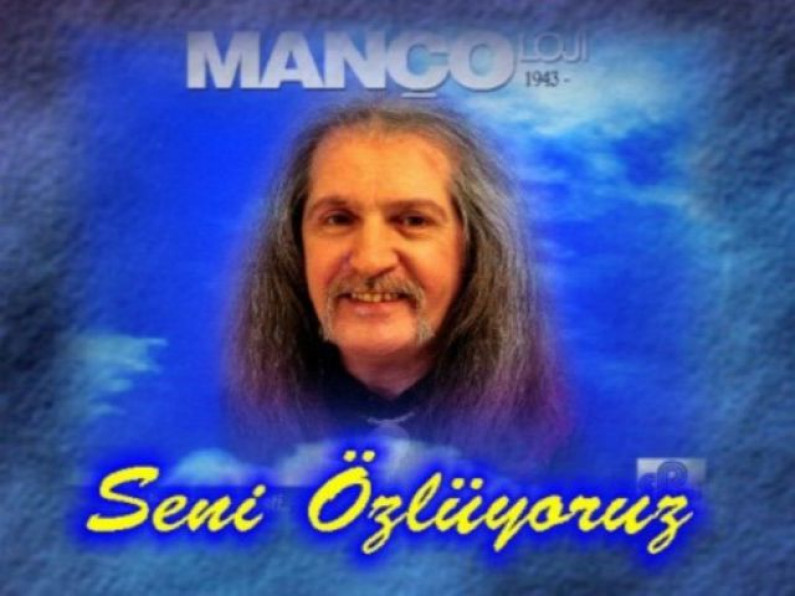 Mehmet Barış Manço (born Tosun Yusuf Mehmet Barış Manço; 2 January 1943 – 1 February 1999), known by his stage name Barış Manço, was a Turkish rock musician, singer, songwriter, composer, and television producer.Beginning his musical career while attending Galatasaray High School, he was a pioneer of rock music in Turkey and one of the founders of the Anatolian rock genre. Manço composed around 200 songs and is among the best-selling and most awarded Turkish artists to date. Many of his songs were translated into a variety of languages including English, French, Japanese, Greek, Italian, Bulgarian, Romanian, Persian, Hebrew, Urdu, Arabic, and German, among others. Through his television program, 7’den 77’ye (“From 7 to 77”), Manço traveled the world and visited most countries on the globe. He remains one of the most popular public figures of Turkey.

Early life and career
Barış Manço was born in Üsküdar, Istanbul, Turkey on 2 January 1943. His mother, Rikkat Uyanık, was a famous singer in the early 1940s. His older brother, who was born during World War II, was named Savaş (“war” in Turkish) while he was named Barış (“peace” in Turkish) by his parents to celebrate the end of the war. At birth, he was additionally named Tosun Yusuf after his deceased uncle Yusuf called Tosun (literally: Yusuf The Sturdy). However, this name was erased just before he attended the primary school.

In primary school his head was shaven to prevent head lice, a serious threat back then, which he cited among reasons for his later signature long hair.

During his highschool days in Galatasaray High School (and later in Şişli Terakki High School) he formed his first band, Kafadarlar (“The Buddies”), allegedly upon seeing Erkin Koray’s band performing, all students of Deutsche Schule Istanbul (İstanbul Alman Lisesi), a nearby highschool. Asaf Savaş Akat, a famous economist in Turkey, played saxophone, and guitarist Ender Enön made his own guitar because it was difficult to find a real one on the market in those years.

In 1962 and 1963, with his next band, Harmoniler (“The Harmonies”), he recorded cover versions of some of popular American twist songs and rearrangements of Turkish folk songs in rock and roll form, marking the beginning of the Anatolian rock movement a synthesis of Turkish folk music and rock. In this period, his key visual and musical influence was Elvis Presley.

After graduating from high school in 1963, he moved to Europe, travelling around Paris and Liège, where he formed bands with local musicians and recorded some singles mainly in English and in French but also in Turkish. He toured with his band Les Mistigris (not related to Mistigris) in Germany, Belgium, France and Turkey until 1967.

In 1967, he suffered a serious car accident, after which he started to grow his signature mustache to disguise his scar.

Frustrated by the difficulties of working with musicians from different nationalities, he formed Kaygısızlar (The Carefrees), featuring Mazhar Alanson and Fuat Güner, future members of the band MFÖ. He recorded several singles and toured with the band, both domestically and internationally, until the band members revealed that they did not want to live abroad.

In 1970, he formed Barış Manço Ve … (“Barış Manço and …”) again with foreign musicians, to record his first hit single, both in Turkey and in Belgium, Dağlar Dağlar (Mountains, Mountains!), selling over 700,000 copies. Today, the song remains one of his most popular works.

1970s
After the success of “Dağlar Dağlar”, Manço recorded a couple of singles with Moğollar (The Mongols), another influential Turkish Anatolian rock band. He then decided to return to Turkey where he recorded with the reformed Kaygısızlar for a short period. In 1971, his early works were compiled under his first full length album Dünden Bugüne, today commonly referred as Dağlar Dağlar.

In 1972, he formed Kurtalan Ekspres, a legend by itself, the band that would accompany him until his death. In 1975 until when he continued to release singles, he released his first non-compilation LP 2023, a concept album that includes many instrumental songs.

As a last attempt to reach international success, he released the LP titled Baris Mancho (1976), a strange transcription of his name, mostly with George Hayes Orchestra under CBS Records label, in Europe and South Africa. Although the album did not bring the fame he was expecting, it did reach the top of the charts in Romania and Morocco. The following year, the album was released in Turkey under the title Nick the Chopper.

From 1977 to 1980, he released three more albums in Turkey, partly consisting of compilations of older singles, namely Sakla Samanı Gelir Zamanı (1977), Yeni Bir Gün (1979) and 20. Sanat Yılı Disko Manço (1980), all following a similar sound with 2023. All these albums are now rarity items, but most of the material from the era are available in later compilations Ben Bilirim and Sarı Çizmeli Mehmet Ağa.

1980s
In 1981, Manço released Sözüm Meclisten Dışarı with Kurtalan Ekspres, containing many hit songs including “Alla Beni Pulla Beni”, “Arkadaşım Eşek”, “Gülpembe”, “Halhal” and “Dönence” among others. The album remains as one of their most popular works and launched a boost of popularity for Barış Manço during the 1980s.

“Arkadaşım Eşek” (“My Friend Donkey”), quickly grew very popular among children (the song is about rural nostalgia and was not initially intended as a children’s song).Throughout his career, he went on to write many other songs primarily for children to achieve an iconic acceptance among Turkish children of the 1980s and 1990s.

On the other hand “Gülpembe”, composed by Kurtalan Ekspres bassist Ahmet Güvenç, a requiem for Manço’s grandmother, caught older audiences and probably is the artist’s most popular song, competing perhaps only with “Dağlar Dağlar”.

In 1985, 24 Ayar Manço which included “Gibi Gibi” and a long conceptual song “Lahburger” was released. It also marked the beginning of the shift in Manço’s sound characterized with the heavy use of synthesizers and drum machine in contrast with his older works consisting of a group oriented rock based sound. In subsequent years, Manço released Değmesin Yağlı Boya (1986), Sahibinden İhtiyaçtan (1988) and Darısı Başınıza (1989), all containing a couple of hit songs and demonstrating his new sound.

In 1988, 7’den 77’ye (From 7 to 77), a TV show directed and presented by Manço, began to run on TRT 1, the Turkish state television channel. It was a combined music, talk show, and documentary program which was a major hit during the eight years it stayed on air. Manço traveled to almost 150 countries for the show. “Adam Olacak Çocuk”, a part of the show, strengthened Manço’s acceptance among children.

Although his popularity continued mostly due to the TV show, his musical works in the 1990s were not well received. The albums Mega Manço (1992) and Müsadenizle Çocuklar (1995) were considered as the weakest efforts of his career, despite the limited success of 1992 children hit “Ayı” (The Bear). On the other hand, in 1995 he toured in Japan with Kurtalan Ekspres, leading to Live In Japan (1996), his only live album. He released two albums in that country with some recognition as “the man who writes songs about vegetables”, referring to “Domates, Biber, Patlıcan” (“Tomato, Pepper, Aubergine”) and “Nane, Limon Kabuğu” (Mint, Lemon Rind), two of his hit songs from the 1980s.

Death
On 31 January 1999, Barış Manço died of a sudden heart attack before the release of his just finished last work Mançoloji (Mançology or Manchology) (1999), a double album containing the new recordings of his hit songs along with an unfinished instrumental song “40. Yıl” (“The 40th Anniversary”), celebrating his 40th year in music. His sudden death caused an almost unanimous shock in Turkey with millions of people mourning and tens of thousands of people attending his funeral.

Legacy
Barış Manço was one of the most influential Turkish musicians. In his early career he and his bands contributed to the Turkish rock movement by combining traditional Turkish music with rock influences, which is still one of the main trends of Turkish popular music.

His visual image, characterized by his long hair, mustache and big rings, softened the reaction of the otherwise conservative Turkish public opinion.

Manço pioneered the progressive rock-influenced Anatolian rock movement in the 1970s. His experimentation with electronic instruments in the late 1980s contributed to the 1990s sound of Turkish popular music.

His lyrics with diverse themes, mostly following a somewhat modernized version of the “aşık” (wandering folk poets) tradition were heavily marginal in the popular music scene of the 1980s which was mostly dominated by love-themed lyrics.

In 2002, a tribute album was released under the name Yüreğimdeki Barış Şarkıları (“Songs of Barış In My Heart”), featuring 15 extremely popular Turkish artists of such diverse genres as arabesque, pop and rock (both Anatolian and western style) demonstrating his wide range of influence.