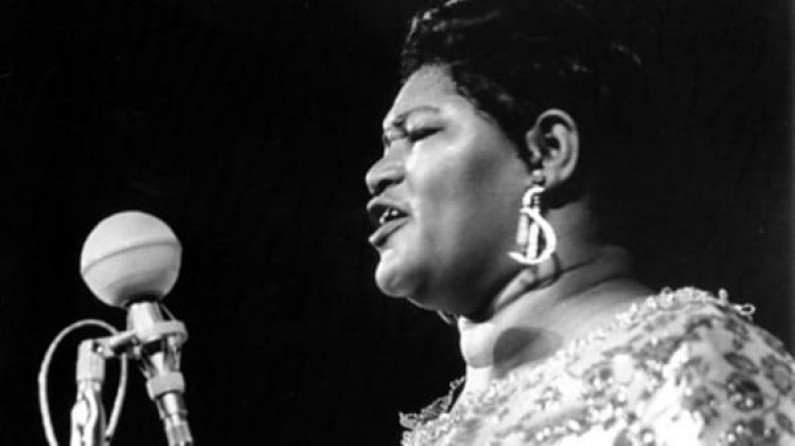 She was the first to record Leiber and Stoller’s “Hound Dog” in 1952, which became her biggest hit. It spent seven weeks at number one on the Billboard R&B charts in 1953 and sold almost two million copies.

However, her success was overshadowed three years later, when Elvis Presley recorded his more popular rendition of “Hound Dog”. Similarly, Thornton’s “Ball ‘n’ Chain” (written in 1961 but not released until 1968) had a bigger impact when performed and recorded by Janis Joplin in the late 1960s.

Thornton’s performances were characterized by her deep, powerful voice and strong sense of self. Many collaborators described her with words such as monstrous, intimidating, formidable, and menacing.

She was given her nickname, “Big Mama,” by Frank Schiffman, manager of Harlem’s Apollo Theater, due to her big voice, size, and personality. Thornton specialized in playing drums and harmonica as well as singing, and she taught herself how to play these instruments simply by watching other musicians perform.

Her style was heavily influenced by the gospel music that she witnessed growing up in the home of a preacher, though her genre could be described as blues.

Thornton was famous for her transgressive gender expression. She often dressed as a man in her performances, wearing items such as work shirts and slacks. This led to many rumors about her sexuality, though none confirmed.

Her improvisation was a notable part of her performance. She often enters call-and-response exchanges with her band, inserting confident and notably subversive remarks. Her play with gender and sexuality set the stage for later rock ‘n’ roll artists’ own plays with sexuality.