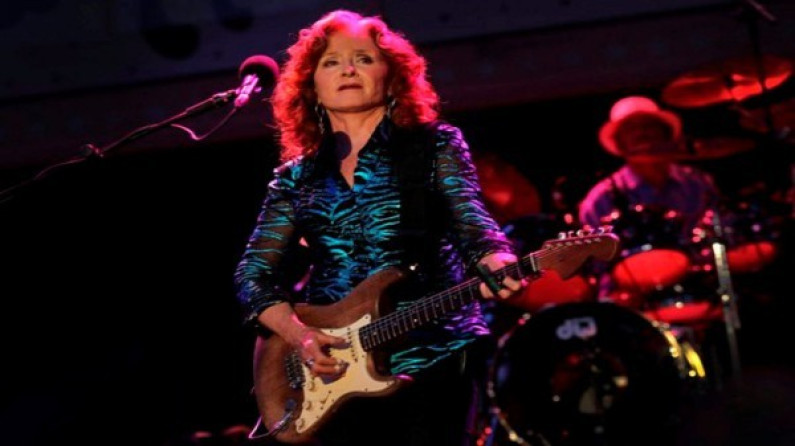 Bonnie Lynn Raitt (born November 8, 1949) is an American blues singer-songwriter and slide guitar player. During the 1970s, Raitt released a series of roots-influenced albums which incorporated elements of blues, rock, folk and country. In 1989 after several years of critical acclaim but little commercial success she had a major return to form with the release of her album Nick of Time.

The following two albums Luck of the Draw (1991) and Longing in Their Hearts (1994) were also multi-million sellers generating several hit singles, including “Something to Talk About”, “Love Sneakin’ Up on You”, and the ballad “I Can’t Make You Love Me” (with Bruce Hornsby on piano).

Raitt appeared on the June 7, 2008, broadcast of Garrison Keillor’s radio program A Prairie Home Companion. She performed two blues songs with Kevin “Keb’ Mo'” Moore: “No Getting Over You” and “There Ain’t Nothin’ in Ramblin'”.

Raitt also sang “Dimming of the Day” with Richard Thompson. This show, along with another one with Raitt and her band in October 2006, is archived on the Prairie Home Companion website.

In February 2012, Raitt performed a duet with Alicia Keys at the 54th Grammy Awards in 2012 honoring Etta James.

In April 2012, Raitt released her first studio album since 2005, entitled Slipstream. It charted at Number 6 on the US Billboard 200 chart marking her first top ten album since 1994’s Longing in Their Hearts. The album was described as “one of the best of her 40-year career” by American Songwriter magazine.

In September 2012, Raitt was featured in a campaign called “30 Songs / 30 Days” to support Half the Sky: Turning Oppression into Opportunity for Women Worldwide, a multi-platform media project inspired by a project outlined in a book by Nicholas Kristof and Sheryl WuDunn. In 2013, she appeared on Foy Vance’s album Joy of Nothing.