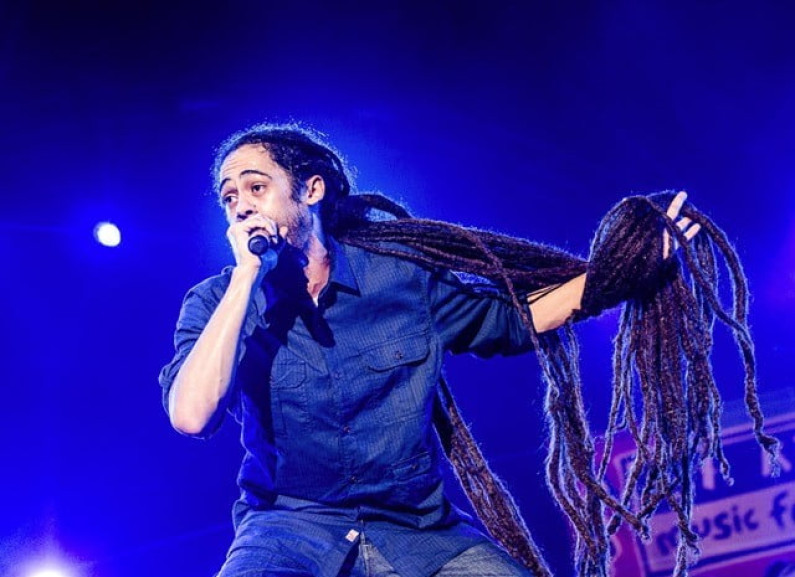 Damian Robert Nesta “Jr. Gong” Marley (born 21 July 1978), is a Jamaican reggae artist. Damian is the youngest son of reggae legend Bob Marley.Damian was only 2 years old when his father died; he is the only child born to Marley and Cindy Breakspeare, Miss World 1976. Damian’s nickname Junior Gong is derived from his father’s nickname of Tuff Gong. Damian has been performing since the age of 13.

Early releases (1992-04)
At age 13, he formed a musical group by the name of the Shephards, which included the daughter of Freddie McGregor and son of Third World’s Cat Core. The group opened the 1992 Reggae Sunsplash festival.The band fell apart in the early 1990s and Damian started his solo career.

With the backing of his father’s label, Tuff Gong, he released his 1996 debut album Mr. Marley which surprised many who were unaccustomed to hearing a Marley deejaying rather than singing.Marley released his second studio album Halfway Tree.

The name “Halfway Tree” comes from his mother, Cindy Breakspeare, being from the rich part of town, and his father, Bob Marley, coming from the poor part of town, thus him being “a tree halfway in between the ‘rich’ world and ‘poor’ world.”

Additionally, Halfway Tree is a well-known landmark that marks the cultural center of Half-Way-Tree, the clock tower that stands where the historical eponymous cotton tree once stood is featured prominently behind Marley on the cover of the album. The album was released on 11 September 2001 and received the 2002 Grammy Award for Best Reggae Album. It was co-produced by Damian Marley and his brother Stephen Marley.

The sold 86,000 copies in its first week of release and was eventually certified gold after selling 500,000 copies in the United States.Other notable singles from the album include “The Master Has Come Back”, “Road to Zion” featuring Nas, and “Khaki Suit” featuring Bounty Killer and Eek-A-Mouse.

Damian’s brother, Stephen Marley, was a producer and co-writer of the hugely successful song of the same name. The lyrics to the single “Welcome to Jamrock”, which was performed over a riddim produced by Sly and Robbie for Ini Kamoze some 20 years earlier, centred around poverty, politics and crime in Jamaica.

While the single was controversial at home over its perceived negative viewpoint of the island, many praised the content of the song. Dr. Clinton Hutton, professor at the University of the West Indies, said of the single, “‘Jamrock’ uses the icon of the inner city, of alienation, of despair, of prejudice, but of hope, of Jamaican identity, to remind us of the fire of frustration, the fire of creativity, the fire of warning to open up our eyes and look within to the life we are living.

And still some of us don’t want to hear and to look and say enough is enough.” The single reached No. 13 on the UK Singles Chart and No. 55 on the US Billboard Hot 100 chart.It was also No. 100 on the Top 100 Songs of the Decade listing by Rolling Stone.