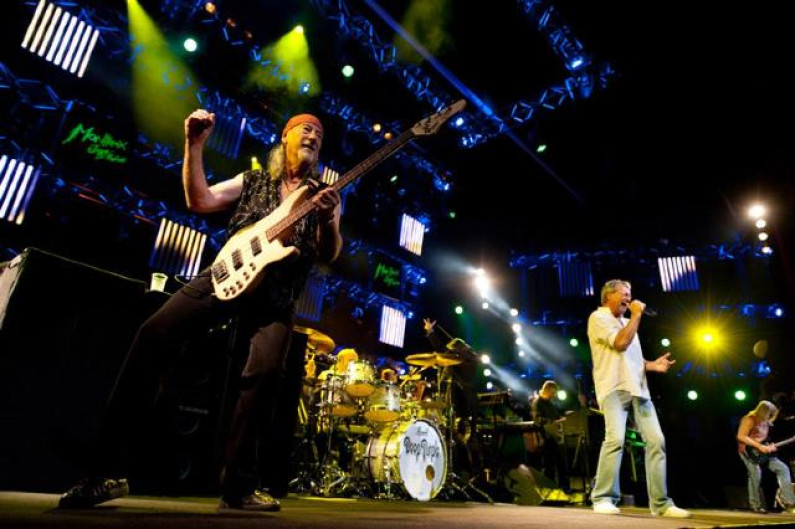 Deep Purple were ranked number 22 on VH1’s Greatest Artists of Hard Rock programme and a poll on British radio station Planet Rock ranked them 5th among the “most influential bands ever”. At the 2011 Classic Rock Awards in London, they received the Innovator Award. In October 2012, Deep Purple were nominated for the first time for the Rock and Roll Hall of Fame, but were not voted in the following March. In October 2013, the band was announced as a Hall of Fame nominee for a second time, but again was not voted in.

In 1967, former Searchers drummer Chris Curtis contacted London businessman Tony Edwards, in the hope that he would manage a new group he was putting together, to be called Roundabout. Curtis’ vision was a “supergroup” where the band members would get on and off, like a musical roundabout.

Impressed with the plan, Edwards agreed to finance the venture with two business partners: John Coletta and Ron Hire, all of Hire-Edwards-Coletta (HEC) Enterprises.

The first recruit to the band was the classically trained Hammond organ player Jon Lord, Curtis’ flatmate who had most notably played with The Artwoods (led by Art Wood, brother of future Rolling Stones guitarist Ronnie Wood, and featuring Keef Hartley). He was followed by guitarist Ritchie Blackmore, who was persuaded to return from Hamburg to audition for the new group.

Blackmore was making a name for himself as a studio session guitarist, and had also been a member of The Outlaws, Screaming Lord Sutch, and Neil Christian. Curtis’ erratic behaviour, including a sudden disinterest in the project he had started, forced HEC to dismiss him from Roundabout. But Lord and Blackmore were keen to continue, and carried on recruiting additional members, keeping Tony Edwards as their manager.

For the bass guitar, Lord suggested his old friend Nick Simper, with whom he had played in a band called The Flower Pot Men and their Garden (formerly known as The Ivy League) back in 1967. Simper had previously been in Johnny Kidd and The Pirates and survived the car crash that killed Kidd.

Simper had known Blackmore since the early 1960s when his first band, the Renegades, debuted around the same time as one of Blackmore’s early bands, the Dominators. Bobby Woodman was the initial choice for the drums, but during the auditions for a singer, Rod Evans of the Maze came in with his drummer, Ian Paice.

Blackmore had seen Paice on tour with the Maze in Germany in 1966, and had been impressed by the 18-year-old’s drumming. While Woodman was out for cigarettes, Blackmore quickly arranged an audition for Paice. Both Paice and Evans won their respective jobs, and the line-up was complete.

The band began in earnest in March 1968 at Deeves Hall, a country house in South Mimms, Hertfordshire. The band would live, write and rehearse at Deeves Hall, which was fully kitted out with the latest Marshall amplification.

After a brief tour of Denmark and Sweden in April, in which they were still billed as Roundabout, Blackmore suggested a new name: “Deep Purple”, named after his grandmother’s favourite song.

The group had resolved to choose a name after everyone had posted one on a board in rehearsal. Second to Deep Purple was “Concrete God”, which the band thought was too harsh to take on.
Legacy

Deep Purple are cited as one of the pioneers of hard rock and heavy metal, along with Led Zeppelin and Black Sabbath. The group have influenced a number of rock and metal bands including Metallica, Queen, Aerosmith, Van Halen, Alice in Chains, Pantera, Bon Jovi, Europe, Rush, Motörhead, and many New Wave of British Heavy Metal bands such as Iron Maiden, Judas Priest, and Def Leppard.Iron Maiden’s bassist and primary songwriter, Steve Harris, states that his band’s “heaviness” was inspired by “Black Sabbath and Deep Purple with a bit of Zeppelin thrown in.”

In 2000, Deep Purple were ranked number 22 on VH1’s “100 Greatest Artists of Hard Rock” programme. In 2011, they received the Innovator Award at the 2011 Classic Rock Awards in London. A Rolling Stone readers’ poll in 2012 ranked Made in Japan the sixth best live album of all time.

As part of the 40th anniversary celebrations of Machine Head (1972), Re-Machined: A Tribute to Deep Purple’s Machine Head was released on 25 September 2012.

Kiss bassist Gene Simmons and Rush bassist Geddy Lee commented that Deep Purple should obviously be among the Rock and Roll Hall of Fame inductees. There have been criticisms in the past over Deep Purple not having been inducted.

Former Guns N’ Roses guitarist Slash expressed his surprise and disagreement for the non-induction of Deep Purple; “The list of people who haven’t even been nominated is mind-boggling..(the) big one for me is Deep Purple. How could you not induct Deep Purple?”.

Cause they had great songs, great musicianship, they had an impact, and they’re a huge influence on the heavy metal community as a whole. So I definitely think that they belong in the Rock and Roll Hall Of Fame.”

In response to these, a Hall of Fame chief executive said, “The definition of ‘rock and roll’ means different things to different people, but as broad as the classifications may be, they all share a common love of the music.” Roger Glover remains ambivalent about induction and got an inside word from the Hall, “One of the jurors said, ‘You know, Deep Purple, they’re just one-hit wonders.’

How can you deal with that kind of Philistinism, you know?”. Ian Gillan also commented, “I’ve fought all my life against being institutionalised and I think you have to actively search these things out, in other words mingle with the right people, and we don’t get invited to those kind of things.” On 16 October 2013 Deep Purple were again announced as nominees for inclusion to the Hall, and once again they were not inducted.

Deep Purple are considered to be one of the hardest touring bands in the world. From 1968 until today (with the exception of their 1976–1984 split) they continue to tour around the world. In 2007, the band received a special award for selling more than 150,000 tickets in France, with 40 dates in the country in 2007 alone.

In February 2008, the band made their first ever appearance at the Kremlin Palace in Moscow, Russia at the personal request of Dmitry Medvedev who at the time was considered a shoo-in for the seat of the Presidency of Russia. Prior to that, Deep Purple has toured Russia several times starting as early as 1996, but has not been considered to have played such a significant venue previously. The band was part of the entertainment for the FIS Nordic World Ski Championships 2009 in Liberec, Czech Republic.