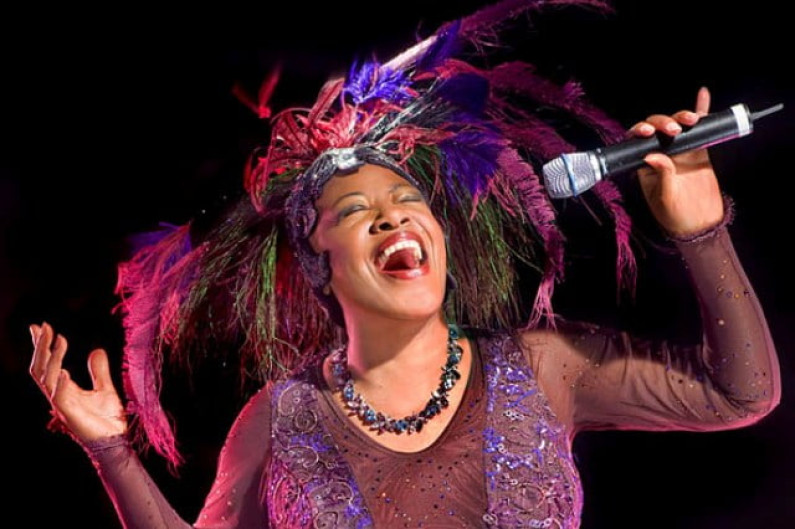 Francine Reed (born July 11, 1947, Pembroke Township, Illinois) is an American blues singer, solo artist, and regular singing partner of Lyle Lovett since the 1980s and member of Lovett’s Large Band. Reed has also recorded duets with Willie Nelson and Delbert McClinton and others.

Reed sang at church services in her youth and her music was inspired and influenced by her gospel-singing father. She is the sister of jazz singer Margo Reed.

In Phoenix, Arizona, Francine Reed appeared with Miles Davis, Stanley Jordan, Smokey Robinson, Etta James, and The Crusaders. In 1985, she began recording and touring with Lyle Lovett and His Large Band.

Reed has also appeared on recordings by Delbert McClinton, Willie Nelson and Roy Orbison. After she relocated to Georgia in the 1990s, she released her first solo album, I Want You to Love Me.

Reed has received the W. C. Handy Artist of the Year and Song of the Year nominations. (The W. C. Handy awards were renamed the Blues Music Awards in 2006). Reed was inducted into the Arizona Blues Hall of Fame in 1997.

Reed is perhaps best known for her performances of the classic blues song “Wild Women (Don’t Get the Blues),” written in 1924 by Ida Cox. A recording of this song appears on Reed’s albums, I Want You to Love Me, I Got a Right!…to Some of My Best, and Blues Collection; as well as on Ichiban Records Wild Women Do Get the Blues and Lyle Lovett’s Live in Texas.

Reed’s distinctive voice can be heard on a television advertisement for Senokot laxative (“I Feel Good”), and in a scene from the film, The Firm (1993).