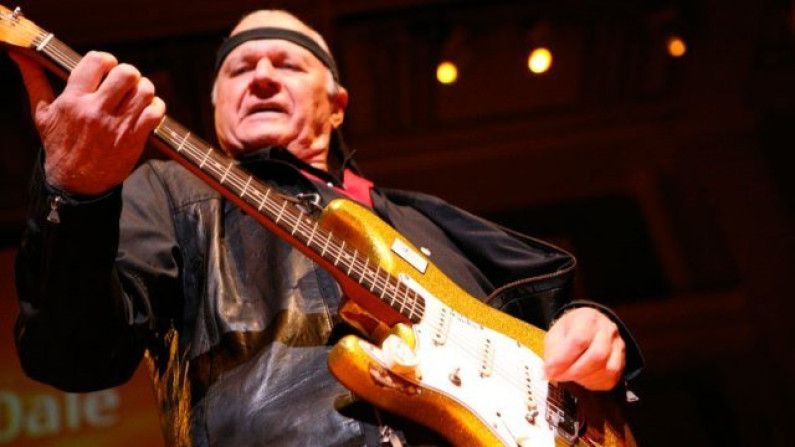 Dick Dale (born Richard Anthony Monsour on May 4, 1937) is an American surf rock guitarist, known as The King of the Surf Guitar.

He pioneered the surf music style, drawing on Eastern musical scales and experimenting with reverberation. He worked closely with Fender to produce custom made amplifiers including the first-ever 100-watt guitar amplifier.

” The “breakneck speed of his single-note staccato picking technique” and showmanship with the guitar is considered a precursor to heavy metal music, influencing guitarists such as Jimi Hendrix and Eddie Van Halen.

Dale was born Richard Anthony Monsour in Boston, Massachusetts, on May 4, 1937 although many biographies of Dale repeat his earlier assertion that he was born in Beirut, Lebanon.He is of Lebanese descent from his father and Polish-Belarusian descent from his mother.

His father was born in Beirut, and his mother’s parents came to the U.S. from Poland; they farmed in Whitman, Massachusetts. Dale’s family moved to Quincy, Massachusetts, which had a significant Lebanese immigrant community, when Dale was very young.

He learned to play music, starting with piano when he was nine.Dale admired Hank Williams—he wanted to be a cowboy singer—so he bought a plastic ukelele for $6 and taught himself to play by reading an instruction book. The first song he played on the ukelele was Tennessee Waltz.

He then learned to play guitar, using a combination style incorporating both lead and rhythm aspects, so that the guitar filled the place of drums. He was raised in Quincy until he completed the 11th grade at Quincy High School in 1954, when his machinist father obtained a job in the Southern California aerospace industry.