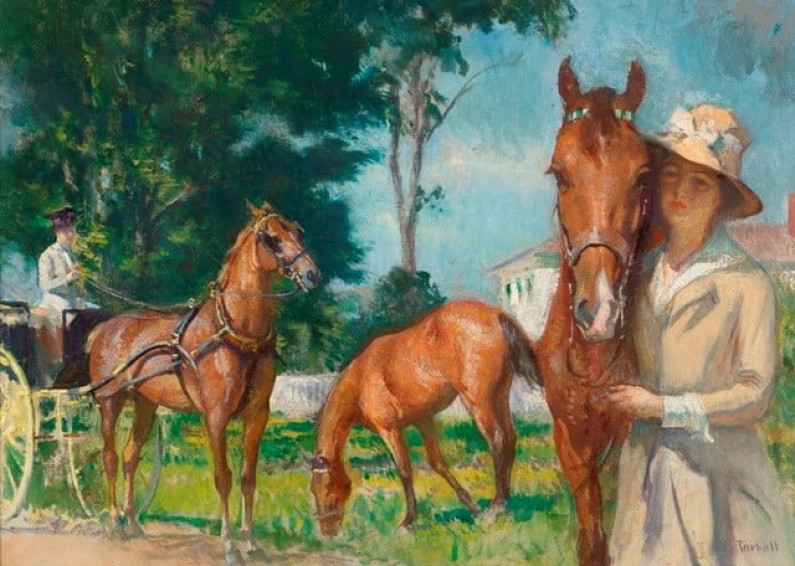 Edmund Charles Tarbell (April 26, 1862 – August 1, 1938) was an American Impressionist painter. A member of the Ten American Painters, his work hangs in the Boston Museum of Fine Arts, Metropolitan Museum of Art, National Gallery of Art, Smithsonian American Art Museum, Corcoran Gallery of Art, DeYoung Museum, National Academy Museum and School, New Britain Museum of American Art, Worcester Art Museum, and numerous other collections. He was a leading member of a group of painters which came to be known as the Boston School.

Edmund C. Tarbell was born in the Asa Tarbell House, which stands beside the Squannacook River in West Groton, Massachusetts. His father, Edmund Whitney Tarbell, died in 1863 after contracting typhoid fever while serving in the Civil War.

His mother, Mary Sophia (Fernald) Tarbell, remarried a shoemaking-machine manufacturer. Young “Ned” (as he was nicknamed) and his older sister, Nellie Sophia, were left to be raised by their paternal grandparents in Groton, a frontier town during the French and Indian Wars that the early Tarbell family helped settle.

As a youth, Tarbell took evening art lessons from George H. Bartlett at the Massachusetts Normal Art School. Between 1877 and 1880, he apprenticed at the Forbes Lithographic Company in Boston.

In 1879, he entered the School of the Museum of Fine Arts, Boston, studying under Otto Grundmann. He matriculated in the same class with Robert Lewis Reid and Frank Weston Benson, two other future members of the Ten American Painters.

Tarbell was encouraged to continue his education in Paris, France, then center of the art world. Consequently, in 1883 he entered the Académie Julian to study under Gustave Boulanger and Jules Joseph Lefebvre.

Paris exposed him to rigorous academic training, which invariably included copying Old Master paintings at the Louvre, but also to the Impressionist movement then sweeping the city’s galleries. That duality would inform his work. In 1884, Tarbell’s education included a Grand Tour to Italy, and the following year to Italy, Belgium, Germany and Brittany.

Tarbell returned to Boston in 1886, where he began his career as an illustrator, private art instructor and portrait painter.