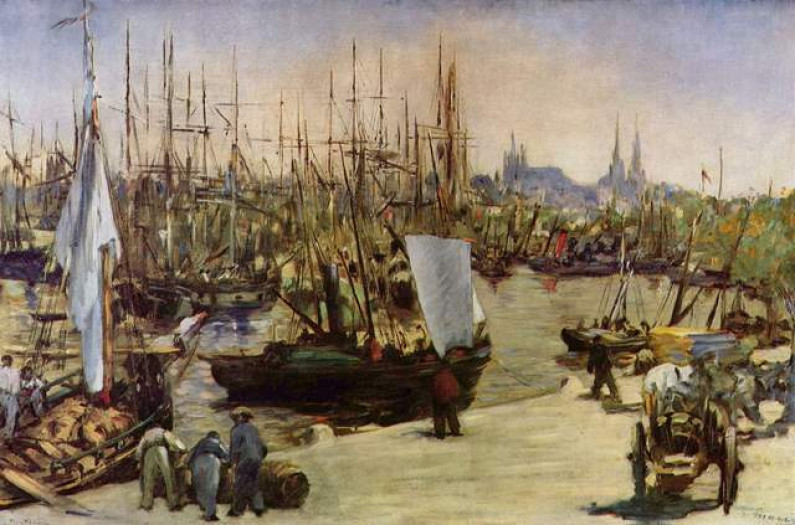 Édouard Manet was born into an upper-middle class Parisian family. His father, August, was a dedicated, high-ranking civil servant and his mother, Eugenie, was the daughter of a diplomat.

Along with his two younger brothers, Manet grew up in a bourgeois environment, both socially conservative and financially comfortable. A mediocre student at best, he enrolled at thirteen in a drawing class at The Rollin School.

Manet had a passion for art from an early age, but agreed to go to the Naval Academy to appease his father. When he failed the entrance exam, he joined the Merchant Marine to gain experience as a student pilot and voyaged to Rio de Janeiro in 1849.

He returned to France the following year with a portfolio of drawings and paintings from his journey, and used it to prove his talent and passion to his father, who was skeptical of Manet’s ambitions.

In 1849, Manet fell in love with his piano teacher, Suzanne Leenhoff. This affair resulted in a boy, Leon (b. 1852), who was passed off to Suzanne’s family and, to avoid scandal, was introduced to society as Suzanne’s younger brother and Manet’s godson. The following year, Manet traveled to Italy, both for the art and for social distraction.

Reluctantly, his father allowed Manet to pursue his artistic goals. In January 1850, true to his contrary nature, instead of going to the Ecole des Beaux-Arts to learn what he considered outdated modes, Manet joined Thomas Couture’s studio.

While Couture was an academic painter, and a product of the Salon system, he encouraged his students to explore their own artistic expression, rather than directly adhere to the aesthetic demands of the days.