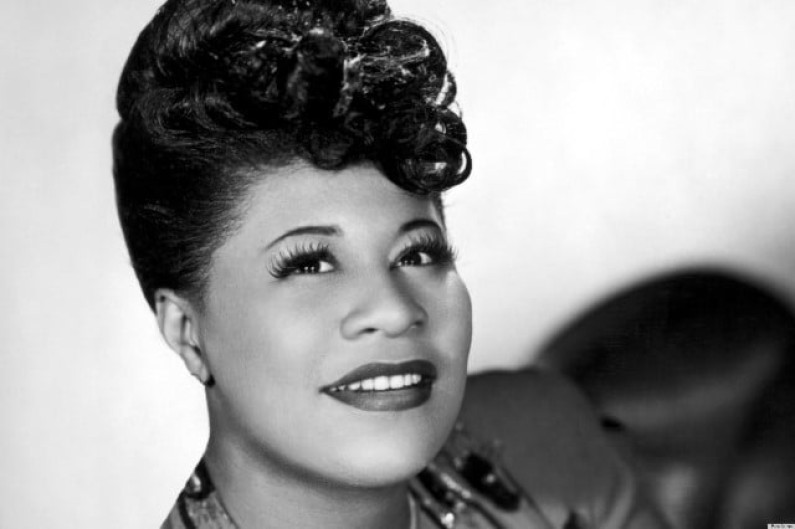 Ella Jane Fitzgerald (April 25, 1917 – June 15, 1996) was an American jazz vocalist with a vocal range spanning three octaves . Often referred to as the “First Lady of Song,” the “Queen of Jazz” and “Lady Ella,” she was noted for her purity of tone, impeccable diction, phrasing and intonation, and a “horn-like” improvisational ability, particularly in her scat singing.

Fitzgerald was a notable interpreter of the Great American Songbook. Over the course of her 60-year recording career, she sold 40 million copies of her 70-plus albums, won 13 Grammy Awards and was awarded the National Medal of Arts by Ronald Reagan and the Presidential Medal of Freedom by George H. W. Bush.

Fitzgerald was still performing at Granz’s JATP concerts by 1955. She left Decca and Granz, now her manager, created Verve Records around her. She later described the period as strategically crucial, saying, “I had gotten to the point where I was only singing be-bop.

I thought be-bop was ‘it’, and that all I had to do was go some place and sing bop. But it finally got to the point where I had no place to sing. I realized then that there was more to music than bop. Norman … felt that I should do other things, so he produced The Cole Porter Songbook with me. It was a turning point in my life.”

On March 15, 1955 Ella Fitzgerald opened her initial engagement at the Mocambo nightclub in Hollywood, after Marilyn Monroe lobbied the owner for the booking.

The booking was instrumental in Fitzgerald’s career. Bonnie Greer dramatized the incident as the musical drama, Marilyn and Ella, in 2008. It has been widely reported that Fitzgerald was the first Black performer to play the Mocambo, following Monroe’s intervention, but this is not true.

African-American singers Herb Jefferies, Eartha Kitt, and Joyce Bryan all played the Mocambo in 1952 and 1953, according to stories published at the time in Jet magazine and Billboard.

Ella Fitzgerald Sings the Cole Porter Songbook, released in 1956, was the first of eight Songbook sets Fitzgerald would record for Verve at irregular intervals from 1956 to 1964.