Exposé – Point Of No Return 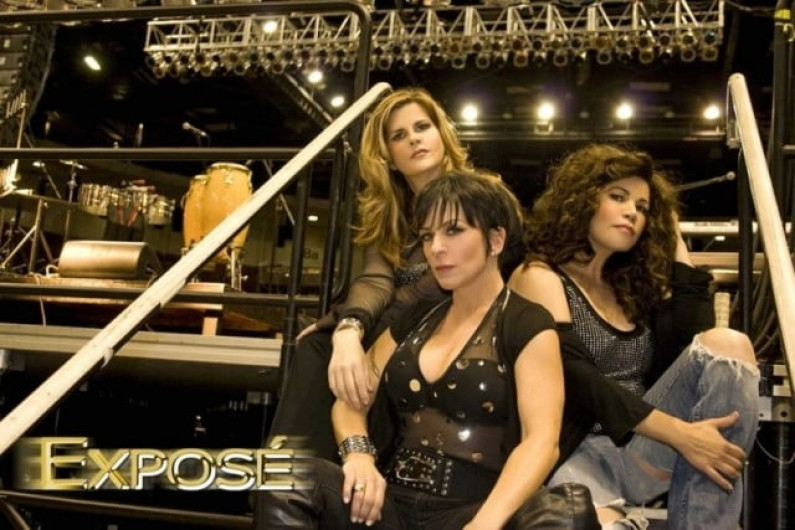 Exposé – Point Of No Return

Exposé is an American vocal group. Primarily consisting of lead vocalists Ann Curless, Jeanette Jurado, and Gioia Bruno, the group achieved much of their success between 1987 and 1993, becoming the first group to have four top ten hits on the Billboard Hot 100 chart from its debut album, including the 1988 #1 hit “Seasons Change”.

The group was popular in dance clubs, mainstream Top 40 and adult contemporary charts in the United States. The group actively toured and recorded music from 1985 to 1995, then retired from recording and public performances until 2003, and currently tour today.

Exposé was initially formed in 1984 when Lewis Martineé, a Miami disc jockey and producer, decided to form a dance-based group.

Working with his partners Ismael Garcia and Frank Diaz at Pantera Productions, talent scouts hired Sandra Casañas (Sandeé), Alejandra Lorenzo (Alé), and Laurie Miller as the group’s lineup, under the name X-Posed, which later became Exposé. The next year, the trio recorded “Point of No Return” for Pantera Records as a 12-inch vinyl single, which became a #1 hit on the Billboard Hot Dance Club Play chart.

The song helped to introduce a still-popular genre of music that became known as freestyle, which often features keyboard riffs, a sing-along chorus, and electro funk drum-machine patterns in the music arrangement.

The success of “Point of No Return” on the dance charts caught the attention of major labels and Expose signed with Arista Records, which promptly assumed distribution of the 12-inch vinyl single.

A year later, Exposé recorded and released its second club-dance freestyle 12-inch single entitled “Exposed to Love”. These songs were released during the period when radio began airing continuous mixes of House/Club/Dance songs in major markets.

As such, Exposé realized continued success, including a club tour to key cities. Impressed with the performance of the two singles on the dance charts, Arista granted approval for the group to record a full-length album.

In December 2007, Jurado, Bruno, Curless, Moneymaker, Paradise Artists, and Walking Distance Entertainment were named as defendants in a lawsuit by Crystal Entertainment & Filmworks (I & II).

At issue was the trademark licensing agreement for the rights to use the name Exposé. The first case was dismissed without prejudice. The second one went to trial. During the process both Paradise Artists and Moneymaker were dismissed as defendants, and a counter suit was filed against the plaintiffs. On May 26, 2009, the court ruled in favor of the defendants on most counts, finding them only guilty of a contractual breach with the plaintiffs.

The court also ruled that the plaintiffs did not prove ownership of the mark, and established that due to the line-up being the same since 1986 (with Moneymaker only replacing Bruno because of her illness) and clear identification of the group members on the albums and with touring, the defendants showed common-law proof of ownership and the “[consumer] goodwill associated with Exposé was with the members”.

The court awarded Jurado, Bruno, and Curless exclusive rights to the name Exposé as a trademark. Exposé mentioned this victory, and performed for the first time with Moneymaker as a guest at the LA Gay Pride Festival on June 14, 2009, making it the first time all four core members, Jurado, Bruno, Curless, and Moneymaker, appeared on stage together. The plaintiffs appealed in The Eleventh Circuit court, and the judgement was affirmed in a published opinion by the district court on June 21, 2011.