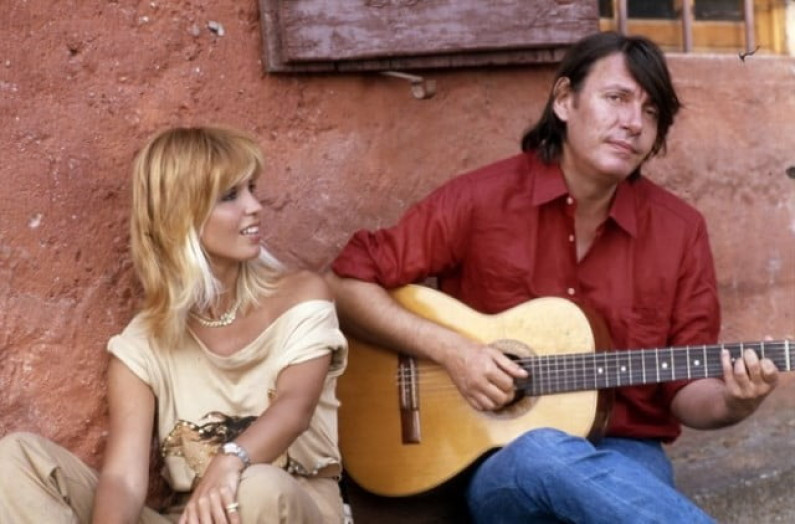 Known for his sympathies towards anarchism, left-libertarianism and pacifism, his songs often featured marginalized and rebellious people, gypsies, prostitutes and knaves, and attacked the Catholic Church hierarchy .

Artistically active for almost 40 years and the author of thirteen studio albums, he is renowned for the quality of his lyrics and often considered a poet.

He contributed to the promotion of the languages of Italy, most notably Ligurian and, to a lesser extent, Sardinian, Gallurese and Neapolitan. Following his early death several streets, places, parks, schools and public libraries were named after him.

De André was born in Genoa, and was welcomed into the world by Gino Marinuzzi’s “Country Waltz” on the home gramophone. Twenty-five years later, he would set his “Waltz for a Lover” to Marinuzzi’s waltz tune.

When the Second World War broke out, the De André family had to seek refuge on a country farm near Revignano (a little town near Asti), in Piedmont.

Fabrizio’s father, who was an antifascista pursued by the police, joined the partisans. In 1945, at the end of the war, the family moved back to Genoa, where the father became an important member of Genoa’s ruling class, as CEO, and later chairman of Eridania, a sugar factory.

Fabrizio’s first primary school was that of the Marcellian Sisters, and he later attended the Cesare Battisti public school and the Liceo Classico “Cristoforo Colombo”; after his school leaving examination, he enrolled in the Law School of the University of Genoa, although he did not graduate, dropping out when he had only a few exams left. De André first played the violin, then the guitar, and he joined a number of local jazz bands, as jazz was his “first love”.

In 1960, De André recorded his first two songs, Nuvole barocche (“Baroque Clouds”) and E fu la notte (“And There Was Night”); in 1962, he married Puny Rignon, a Genoese woman nearly ten years older than him.

That same year the couple had their first and only son, Cristiano, who would follow in his father’s footsteps and become a musician and songwriter as well.