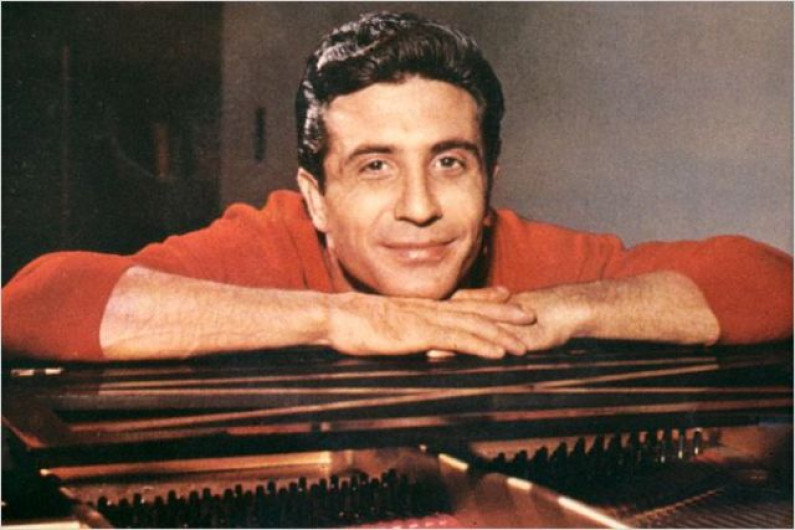 His best-known hits are “Nathalie” and “Et Maintenant”, a 1961 release that became an English language hit as “What Now My Love”. He remained a popular artist for nearly fifty years, identifiable in his dark blue suits, with a white shirt and “lucky tie”; blue with white polka dots.

When asked to explain his gift he said, “A flower doesn’t understand botany.” His favourite venue was the Paris Olympia under the management of Bruno Coquatrix. He debuted there in 1954 and headlined in 1955, attracting 6,000 on his first night, three times the capacity. On November 13, 1997, Bécaud was present for the re-opening of the venue after its reconstruction.

Born François Gilbert Léopold Silly in Toulon, Bécaud learned to play the piano at a young age, and then went to the Conservatoire de Nice. In 1942, he left school to join the French Resistance during World War II.

He began songwriting in 1948, after meeting Maurice Vidalin, who inspired him to write his early compositions. He began writing for Marie Bizet; Bizet, Bécaud and Vidalin became a successful trio, and their partnership lasted until 1950.

While touring with Jacques Pills as a pianist, Bécaud met Édith Piaf, the wife of Jacques Pills at the time. He began singing at her suggestion in 1953, with “Mes Mains” and “Les Croix”. His first performance came the year after. His hits in the later part of the decade included La Corrida (1956), Le Jour où la Pluie Viendra (1957) and C’est Merveilleux L’amour (1958).

His first hit in the English-speaking world was Jane Morgan’s cover version of “Le Jour où la Pluie Viendra” (as “The Days the Rains Came”, with English lyrics by Carl Sigman) in 1958.

He began acting in the same period, starting with “Le Pays D’où Je Viens” (1956). In 1960, he won a Grand Prix du Disque and composed L’enfant à L’étoile, a Christmas cantata.

That same year, Let It Be Me, an English version of his Je t’appartiens, became a hit for the Everly Brothers,followed, over the years, by Bob Dylan, Nina Simone, Elvis Presley, Willie Nelson, Jerry Butler, Sam & Dave and James Brown.