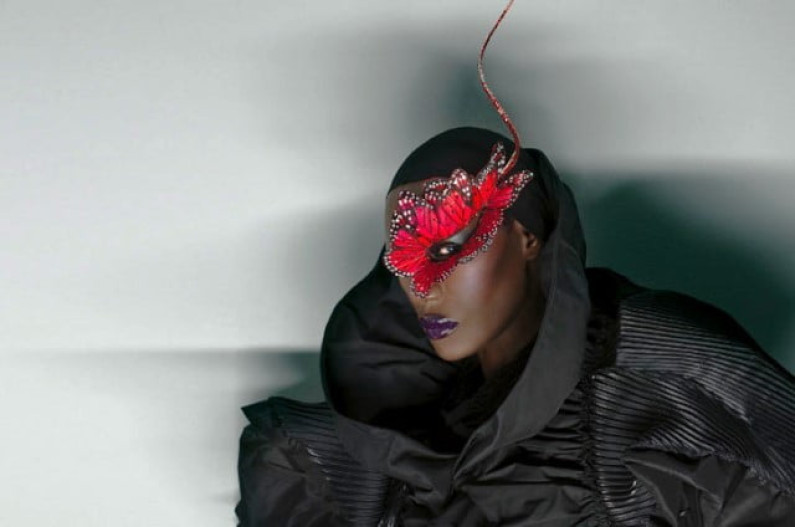 Grace Jones (born 19 May 1948) is a Jamaican singer, lyricist, supermodel, record producer, and actress. She was born in Spanish Town, Jamaica and raised by her grandparents. At 13 she moved with her siblings to their parents’ home in Syracuse, New York.

Jones started out as a model, initially in New York state, then in Paris, working for Yves St. Laurent, Claude Montana, and Kenzo Takada, and appearing on the covers of Elle, Vogue, and Stern working with Helmut Newton, Guy Bourdin, and Hans Feurer.

In 1977 Jones secured a record deal with Island Records; she moved into dance and new wave music, often collaborating with the Compass Point All Stars.

She appeared in some low-budget films in the U.S. during the 1970s and early 1980s. Her first mainstream film was the 1984 fantasy-action film Conan the Destroyer alongside Arnold Schwarzenegger and Sarah Douglas, and the 1985 James Bond movie A View to a Kill.

In 1986 she played a vampire in Vamp, and acted in and contributed a song to the 1992 Eddie Murphy film Boomerang. She appeared alongside Tim Curry in the 2001 film Wolf Girl.

In 1983, Jones’s One Man Show was nominated for a Grammy Award for Best Long-Form Music Video. For her work in Conan the Destroyer, A View to a Kill, and Vamp, she was nominated Saturn Awards for Best Supporting Actress.