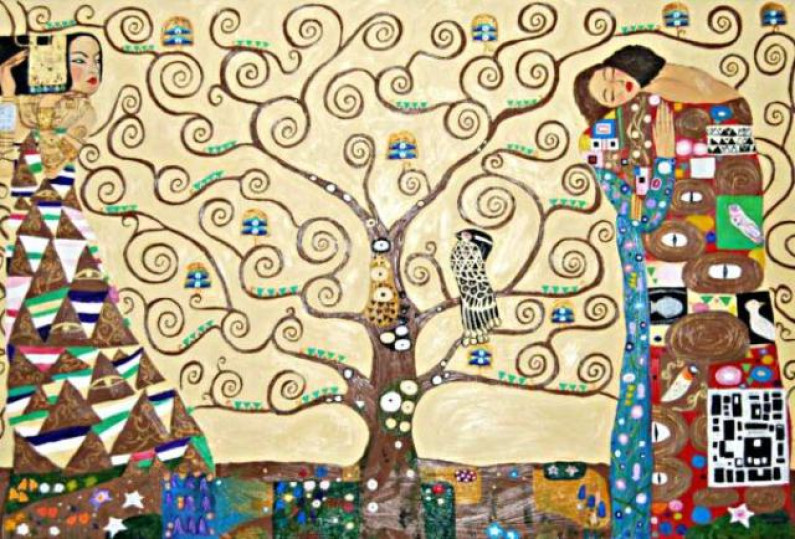 Gustav Klimt (July 14, 1862 – February 6, 1918) was an Austrian symbolist painter and one of the most prominent members of the Vienna Secession movement.

Klimt is noted for his paintings, murals, sketches, and other objets d’art. Klimt’s primary subject was the female body and his works are marked by a frank eroticism.

In addition to his figurative works, which include allegories and portraits, he painted landscapes. Among the artists of the Vienna Secession, Klimt was the most influenced by Japanese art and its methods.

Early in his artistic career, he was a successful painter of architectural decorations in a conventional manner. As he developed a more personal style, his work was the subject of controversy that culminated when the paintings he completed around 1900 for the ceiling of the Great Hall of the University of Vienna were criticized as pornographic.

He subsequently accepted no more public commissions, but achieved a new success with the paintings of his “golden phase,” many of which include gold leaf. Klimt’s work was an important influence on his younger contemporary Egon Schiele.

Gustav Klimt was born in Baumgarten, near Vienna in Austria-Hungary, the second of seven children—three boys and four girls. His mother, Anna Klimt (née Finster), had an unrealized ambition to be a musical performer.

His father, Ernst Klimt the Elder, formerly from Bohemia, was a gold engraver.All three of their sons displayed artistic talent early on. Klimt’s younger brothers were Ernst Klimt and Georg Klimt.

Klimt lived in poverty while attending the Vienna School of Arts and Crafts (Kunstgewerbeschule), where he studied architectural painting until 1883.