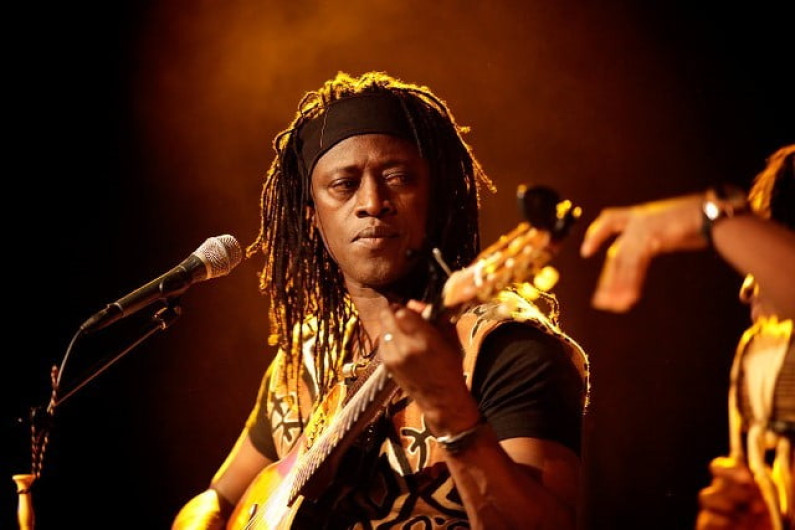 Habib Koité (Bambara: Habib Kuwate, born 1958 in Thiès, Senegal) is a solo singer, songwriter and guitarist, based in Mali. His band, Bamada, is a supergroup of West African musicians, including Kélétigui Diabaté playing balafon.

Koité is known primarily for his unique approach to playing the guitar by tuning it on a pentatonic scale and playing on open strings as one would on a kamale n’goni. Other pieces of his music sound more like the blues or flamenco which are two styles he learned under Khalilou Traore.

Koité was born in 1958 to musical parents, from whom he learned instrumentation by watching and listening. He joined the Bamako National Institute of Arts and became a conductor in 1978 after only six months of playing.

He graduated in 1982, and formed his band Bamada in 1988. The name “Bamada” is a nickname for residents of Mali’s capital city Bamako, and the word roughly translates as “In the mouth of the crocodile.” Other members of the band were friends of Koité’s from childhood.

One of Koité’s best-known songs, “Cigarette Abana” (No more cigarettes), was first recorded in 1991. A new Latin-style version on his later CD Baro, along with the song “Nanalé”, won Koite the Radio France International Discoveries Prize in 1992. After this recognition, Koité was able to launch his first tour outside of Africa in 1994.

He met his manager the next year, and released his first album, Muso Ko which rose to No. 3 on the European World Music Charts. Two tracks from Muso Ko, I Ka Barra and Din Din Wo, were included with Microsoft Windows Vista, exposing his music to millions of listeners. His follow-up album, Ma Ya also did very well.

Koité became one of Mali’s most successful musicians internationally. He has performed and recorded with Eric Bibb and Bonnie Raitt, among other Western musicians.

Raitt also invited Koité to record with her on her latest album Silver Lining. Many of his songs have been featured on various Putumayo compilations, such as Blues Around The World and Mali.

Habib and Bamada were on stage at the African Roots and Shoots Festival at London’s Barbican in 2000 and have also performed at many other international festivals. Later in 2000, Habib was part of the “Voices of Mali” tour in US and Canada. In 2004 and again in 2005, Habib and the Band toured to enthusiastic audiences. He played a single benefit performance in Providence, Rhode Island in December 2005.