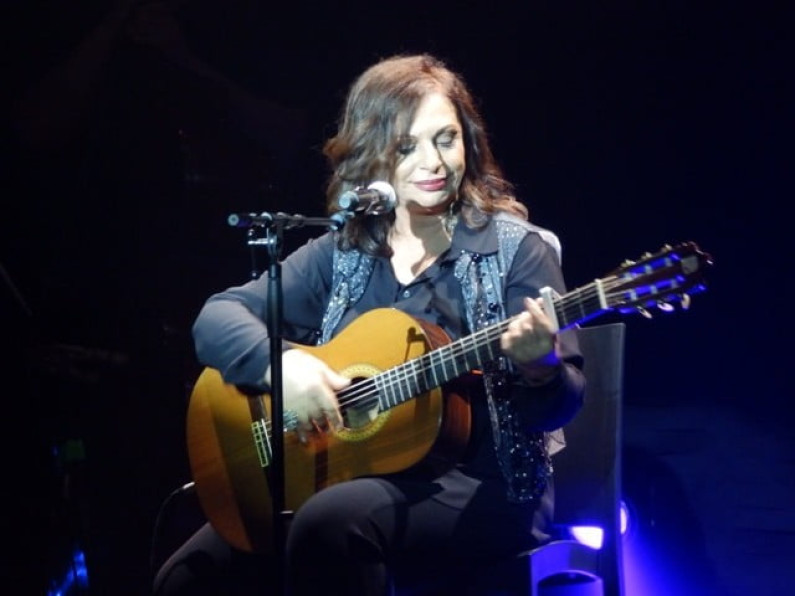 Haris Alexiou ( born 27 December 1950 in Thebes, Greece as Hariklia Roupaka, Greek: Χαρίκλεια Ρουπάκα) is a Greek singer. She is considered one of the most popular singers in Greece and has been commercially successful since the 1970s.

She has worked with important Greek songwriters and composers, has performed at top musical theatres all over the world, and has received several awards.

She has recorded over thirty albums and has been featured on albums of other musicians. On March 14, 2010, Alpha TV ranked Alexiou as the first top-certified female artist in Greece in the phonographic era (since 1960), Chart Show: Your Countdown and the Number 3 overall ranking with regards to the sale of the personal albums certified Gold or Platinum in Greek discography since 1970, behind the male singers George Dalaras and Yiannis Parios.

Eight of her personal albums released between 1977 and 2003 have surpassed 1.5 million sales, the only Greek female singer to do so. She also has an audience in Turkey and her various songs were sung in Turkish especially “Ola Se Thimizoun” (Everything reminds me of you) as “Olmasa Mektubun” (Without your letter) by Yeni Türkü, Erol Evgin, Müslüm Gürses, Sevda Karababa and Pilli Bebek; Teli Teli Teli as “Telli Telli” (Demoiselle, demoiselle), Pes Mou Pos Ginetai (Tell me, how is it possible?) as “Maskeli Balo” (Masquerade) by Yeni Türkü, Athena, Sagopa Kajmer and Ata Demirer; Mia Pista Apo Fosforo (A floor of phosphorus) as “Her şeyi yak” by (Burn everything) Sezen Aksu and as “Nefes Almak İstiyorum” (I want to breathe) by Yonca Evcimik; Krata Gia To Telos (Keep it to the end) as “Sebahat Abla” (Elder sister Sebahat) by Müslüm Gürses; She has lived in Athens since 1958, when she and her family moved there from Thebes. Her grandmother’s family migrated to Thebes in 1924 from Seydiköy, İzmir. Her name was given to a street in Gaziemir.

Haris Alexiou appeared in the Greek music scene in the early 1970s. Her charismatic voice, combined with a unique way of performing and a strong scenic presence, very soon led her to the top.

Today she is still at the top, always working hard, always seeking new ways of expression and always giving prestige and value to the contemporary light and popular Greek music. She has worked with the most important Greek songwriters, has performed at the greatest musical theatres in all five continents and has received several important awards.