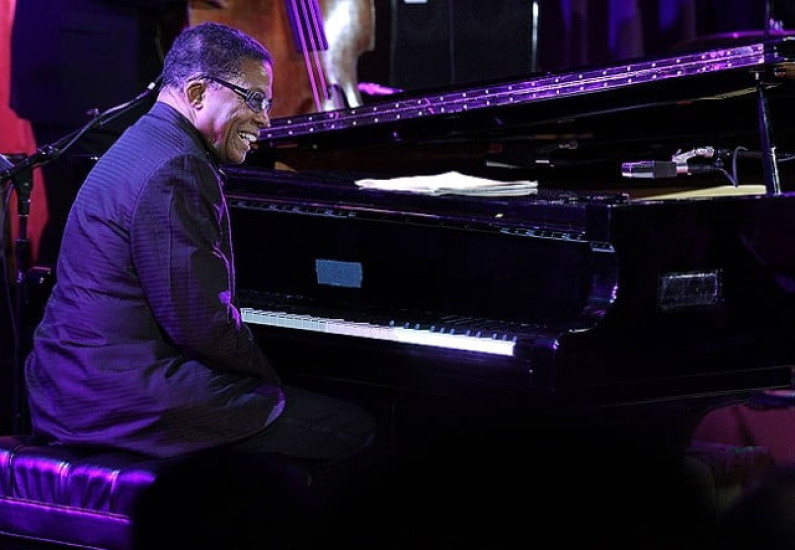 Herbert Jeffrey “Herbie” Hancock (born April 12, 1940) is an American pianist, keyboardist, bandleader and composer. Starting his career with Donald Byrd, he shortly thereafter joined the Miles Davis Quintet where Hancock helped to redefine the role of a jazz rhythm section and was one of the primary architects of the post-bop sound.

He was one of the first jazz musicians to embrace synthesizers and funk music (characterized by syncopated drum beats). Hancock’s music is often melodic and accessible; he has had many songs “cross over” and achieved success among pop audiences.

His music embraces elements of funk and soul while adopting freer stylistic elements from jazz. In his jazz improvisation, he possesses a unique creative blend of jazz, blues, and modern classical music, with harmonic stylings much like the styles of Claude Debussy and Maurice Ravel.

Hancock’s best-known solo works include “Cantaloupe Island”, “Watermelon Man” (later performed by dozens of musicians, including bandleader Mongo Santamaría), “Maiden Voyage”, “Chameleon”, and the singles “I Thought It Was You” and “Rockit”. His 2007 tribute album River: The Joni Letters won the 2008 Grammy Award for Album of the Year, only the second jazz album ever to win the award, after Getz/Gilberto in 1965.

Hancock practices Nichiren Buddhism and is a member of the Buddhist association Sōka Gakkai International.As part of Hancock’s spiritual practice, he recites the Buddhist chant Nam Myoho Renge Kyo each day.In 2013, Hancock’s dialogue with Wayne Shorter and Daisaku Ikeda on jazz, Buddhism and life was published in Japanese.

Hancock received considerable attention when, in May 1963 he joined Davis’s Second Great Quintet. Davis personally sought out Hancock, whom he saw as one of the most promising talents in jazz.

The rhythm section Davis organized was young but effective, comprising bassist Ron Carter, 17-year-old drummer Williams, and Hancock on piano. After George Coleman and Sam Rivers each took a turn at the saxophone spot, the quintet gelled with Wayne Shorter on tenor saxophone.

This quintet is often regarded as one of the finest jazz ensembles and the rhythm section has been especially praised for its innovation and flexibility.[by whom?]