Israel Kamakawiwo’ole – Over the Rainbow 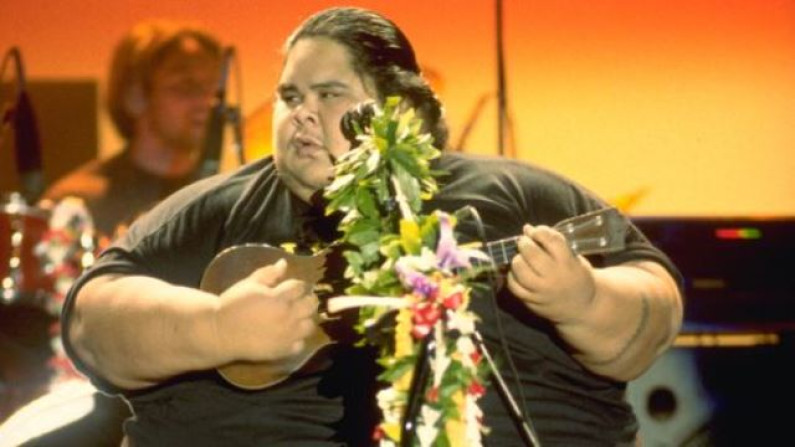 Israel Kamakawiwo’ole – Over the Rainbow

His voice became famous outside Hawaii when his album Facing Future was released in 1993. His medley of “Somewhere over the Rainbow/What a Wonderful World” was subsequently featured in several films, television programs, and television commercials.

Through his skillful ukulele playing and incorporation of other genres, such as jazz and reggae, Kamakawiwoʻole remains a very strong influence on Hawaiian music.

The Makaha Sons of Niʻihau recorded No Kristo in 1976 and released four more albums, including Kahea O Keale, Keala, Makaha Sons of Niʻihau and Mahalo Ke Akua. In 1982, Kamakawiwoʻole’s brother, Skippy, died at age 38 of a heart attack related to obesity. In that same year, Kamakawiwoʻole married his childhood sweetheart Marlene. Soon after, they had a daughter whom they named Ceslie-Ann “Wehi”.

In 1990, Kamakawiwoʻole released his first solo album Ka ʻAnoʻi, which won awards for Contemporary Album of the Year and Male Vocalist of the Year from the Hawaiʻi Academy of Recording Arts (HARA). Facing Future was released in 1993 by The Mountain Apple Company.

It featured his most popular song, the medley “Somewhere over the Rainbow/What a Wonderful World”, along with “Hawaiʻi 78”, “White Sandy Beach of Hawaiʻi”, “Maui Hawaiian Sup’pa Man”, and “Kaulana Kawaihae”. The decision to record a cover of Somewhere Over the Rainbow was said to be a last-minute decision by his producer Jon de Mello and him.

Facing Future debuted at #25 on Billboard magazine’s Top Pop Catalogue chart. On October 26, 2005, Facing Future became Hawaii’s first certified platinum album, selling more than a million CDs in the United States, according to figures furnished by the Recording Industry Association of America.On July 21, 2006, BBC Radio 1 announced that “Somewhere Over the Rainbow/What a Wonderful World (True Dreams)” would be released as a single in America.

In 1994, Kamakawiwoʻole was voted favorite entertainer of the year by the Hawaiʻi Academy of Recording Arts (HARA).

Kamakawiwo’ole’s Facing Future has become the best-selling Hawaiian album of all time.