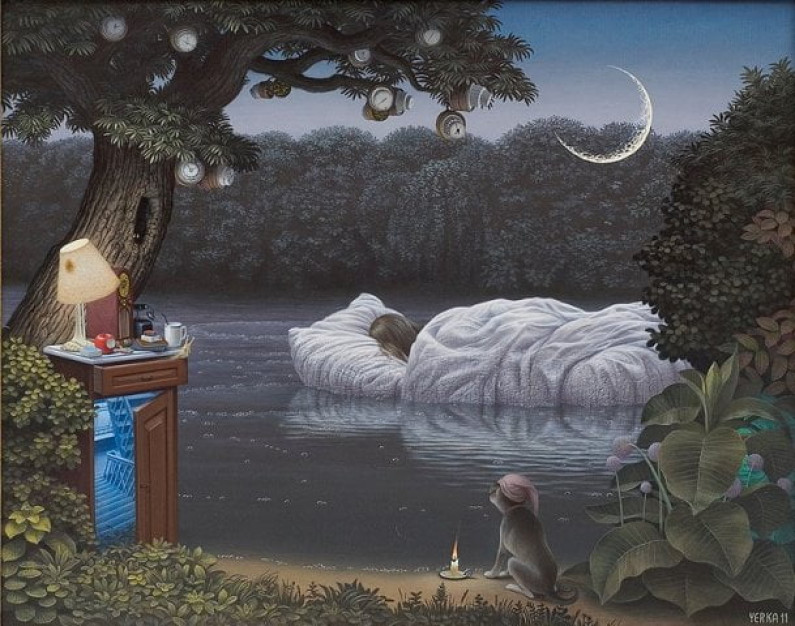 Jacek Yerka (born. Jacek Kowalski in 1952) is a Polish surrealist painter from Toruń. Yerka’s work has been exhibited in Poland, Germany, Monaco, France, and the United States, and may be found in the museums of Poland.

Jacek Yerka was born in Toruń, Poland, in 1952. He was born into an artistic family with both his parents graduates from a local Fine Art Academy.

His earliest memories were of paints, inks, paper, rubbers and brushes. As a child, Yerka loved to draw and make sculptures. He hated playing outside, and preferred to sit down with a pencil, creating and exploring his own world.

This difference between the other children in his primary school led to social problems with his peers and Yerka describes his primary school life as being a “grey, sometimes horrifying reality”. However, Yerka later became ‘untouchable’ in his high school due to his clever sketches of the school’s worst bullies.

Life in the Academy

Yerka had never intended to be an artist like his parents and was considering doing astronomy or medicine. However, a year before his final exam, he decided for the first time to try working with paint, which resulted in his decision to study fine art and graphic design instead.

According to Yerka, during his period studying in the academy he was pressured by his instructors to eschew detail and realism in favor of the fashion of the times – but did not relent, adhering to the meticulous classic Flemish technique that still typifies his work. In time they came to see him as a brilliant – though troubled -talent.