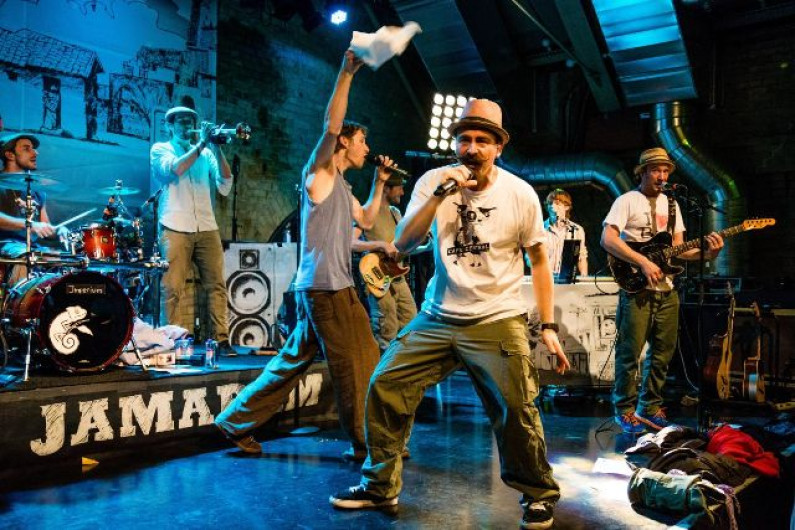 Jamaram is a Munich group of musicians who mainly Reggae, Funk, Latin and Blues play. It was in the year 2000 founded by singer Tom Lugo, drummer Max Alberti and guitarist Sam Hopf. Currently, the band consists of eight members.

Jamaram occurred while international Newcomer-Festival Emergenza and documented in the preliminary rounds two first places, in the finals they reached the second place.

The thus gained notoriety meant that the band already in 2005 gave over 100 concerts and played at several festivals such as the “Chiemsee Reggae Summer”. 2004 produced Jamaram with Kalahassi also their first album, which on Soulfire Artists was published / Rough Trade, so that they also led in 2005 also their first tour in Europe by.

In May 2006, the album was released Ookuchaka!. The first single “Megan” a video with director JRJ Wagner and the well-known German actress was Cosma Shiva Hagen turned. As a location in Weiher was Andechs in Munich elected. In 2007 the third album was Shout it from the rooftops, which was released in April of 2008.

In December 2008, the band was three weeks in Africa – Uganda and Kenya. Invited by the Goethe Institute was the intercultural exchange in the foreground. In addition to 12 concerts, the band filmed a music video at the Victoria Lake and visited the Rainbow House of Hope project in Kampala, which supports the band financially since the end of 2008. In addition, they gave workshops for children and adults.

In 2009 she earned her album Live out. On 31 December 2009 Jamaram played their 700th live show. In mid-May 2010, the band fly Salvador to again get inspiration from other parts of the world. In this context, they played 6 concerts, one of which in Pelorinho (Salvador) particularly stood out.

Geronimo Santana organized in the city for about 30 years, every Tuesday at the same venue a concert, to which he invites besides his own band always one or two foreign bands. In mid-May was this band Jamaram. In 2011 Jamaram earned her fourth studio album called Jameleon out.