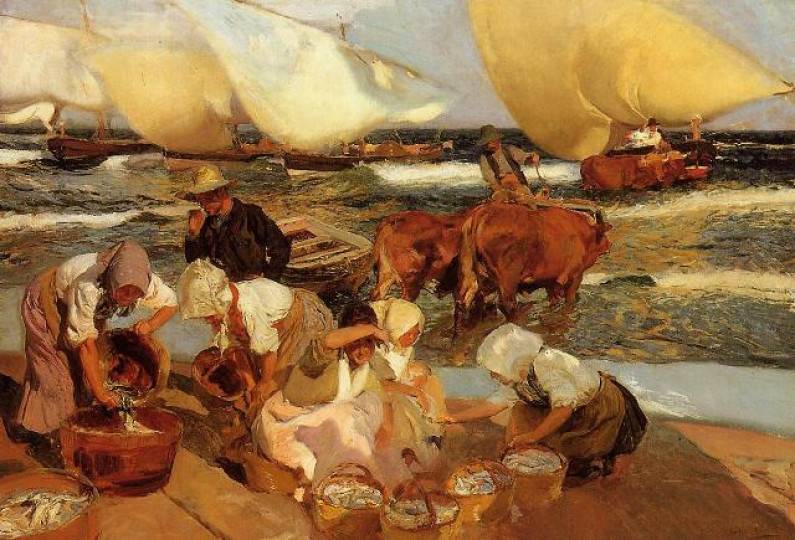 Joaquín Sorolla y Bastida (Spanish) (27 February 1863 – 10 August 1923) was a Spanish painter. Sorolla excelled in the painting of portraits, landscapes, and monumental works of social and historical themes. His most typical works are characterized by a dexterous representation of the people and landscape under the sunlight of his native land.

Joaquín Sorolla was born on February 27, 1863 in Valencia, Spain. Sorolla was the eldest child born to a tradesman, also named Joaquin Sorolla, and his wife, Concepción Bastida.

His sister, Concha, was born a year later. In August 1865, both children were orphaned when their parents died, possibly from cholera. They were thereafter cared for by their maternal aunt and uncle.

He received his initial art education at the age of 9 in his native town, and then under a succession of teachers including Cayetano Capuz, Salustiano Asenjo.

At the age of eighteen he traveled to Madrid, vigorously studying master paintings in the Museo del Prado. After completing his military service, at twenty-two Sorolla obtained a grant which enabled a four-year term to study painting in Rome, Italy, where he was welcomed by and found stability in the example of F. Pradilla, the director of the Spanish Academy in Rome.

A long sojourn to Paris in 1885 provided his first exposure to modern painting; of special influence were exhibitions of Jules Bastien-Lepage and Adolf von Menzel. Back in Rome he studied with José Benlliure, Emilio Sala, and José Villegas Cordero.

In 1888, Sorolla returned to Valencia to marry Clotilde García del Castillo, whom he had first met in 1879, while working in her father’s studio.

By 1895, they would have three children together: Maria, born in 1890, Joaquín, born in 1892, and Elena, born in 1895. In 1890, they moved to Madrid, and for the next decade Sorolla’s efforts as an artist were focussed mainly on the production of large canvases of orientalist, mythological, historical, and social subjects, for display in salons and international exhibitions in Madrid, Paris, Venice, Munich, Berlin, and Chicago.

His first striking success was achieved with Another Marguerite (1892), which was awarded a gold medal at the National Exhibition in Madrid, then first prize at the Chicago International Exhibition, where it was acquired and subsequently donated to the Washington University Museum in St. Louis, Missouri.

He soon rose to general fame and became the acknowledged head of the modern Spanish school of painting. His picture The Return from Fishing (1894) was much admired at the Paris Salon and was acquired by the state for the Musée du Luxembourg. It indicated the direction of his mature output.

These paintings were presented at the National Exhibition of Fine Arts held in Madrid in that year and Sorolla won the Prize of Honor. Here, he presents his friend Simarro as a man of science who transmits his wisdom investigating and, in addition, it is the triumph of naturalism, as it recreates the indoor environment of the laboratory, catching the luminous atmosphere produced by the artificial reddish-yellow light of a gas burner that contrasts with the weak mauvish afternoon light that shines through the window. These paintings may be among the most outstanding world paintings of this genre.