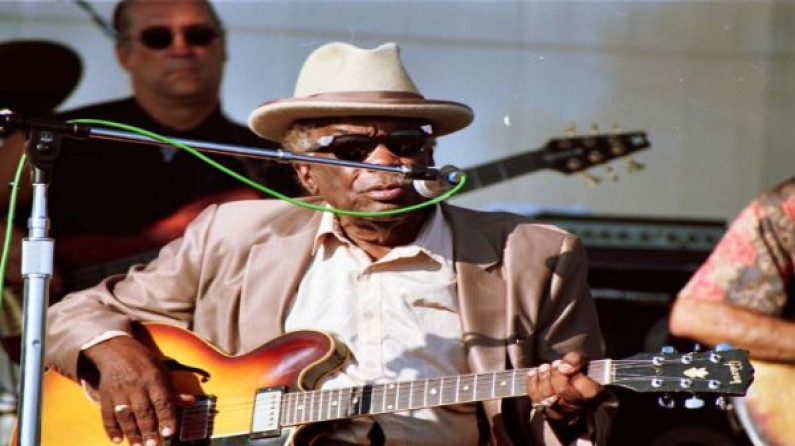 Because of his recording contract, he would record these songs under obvious pseudonyms such as John Lee Booker, notably for Chess Records and Chance Records in 1951/52, as Johnny Lee for De Luxe Records in 1953/54[13] as John Lee, and even John Lee Cooker, or as Texas Slim, Delta John, Birmingham Sam and his Magic Guitar, Johnny Williams, or The Boogie Man.

His early solo songs were recorded under Bernie Besman. John Lee Hooker rarely played on a standard beat, changing tempo to fit the needs of the song.

This often made it difficult to use backing musicians who were not accustomed to Hooker’s musical vagaries. As a result, Besman would record Hooker, in addition to playing guitar and singing, stomping along with the music on a wooden pallet.

For much of this time period he recorded and toured with Eddie Kirkland, who was still performing until his death in a car accident in 2011. Later sessions for the VeeJay label in Chicago used studio musicians on most of his recordings, including Eddie Taylor, who could handle his musical idiosyncrasies very well. His biggest UK hit, “Boom Boom”, (originally released on VeeJay) was recorded with a horn section.

Hooker’s guitar playing is closely aligned with piano boogie-woogie. He would play the walking bass pattern with his thumb, stopping to emphasize the end of a line with a series of trills, done by rapid hammer-ons and pull-offs.

The songs that most epitomize his early sound are “Boogie Chillen”, about being 17 and wanting to go out to dance at the Boogie clubs, “Baby, Please Don’t Go”, a blues standard first recorded by Big Joe Williams, and “Tupelo Blues”, a song about the flooding of Tupelo, Mississippi in April 1936.

He maintained a solo career, popular with blues and folk music fans of the early 1960s and crossed over to white audiences, giving an early opportunity to the young Bob Dylan. As he got older, he added more and more people to his band, changing his live show from simply Hooker with his guitar to a large band, with Hooker singing.

His vocal phrasing was less closely tied to specific bars than most blues singers. This casual, rambling style had been gradually diminishing with the onset of electric blues bands from Chicago but, even when not playing solo, Hooker retained it in his sound.

Though Hooker lived in Detroit during most of his career, he is not associated with the Chicago-style blues prevalent in large northern cities, as much as he is with the southern rural blues styles, known as delta blues, country blues, folk blues, or front porch blues. His use of an electric guitar tied together the Delta blues with the emerging post-war electric blues.