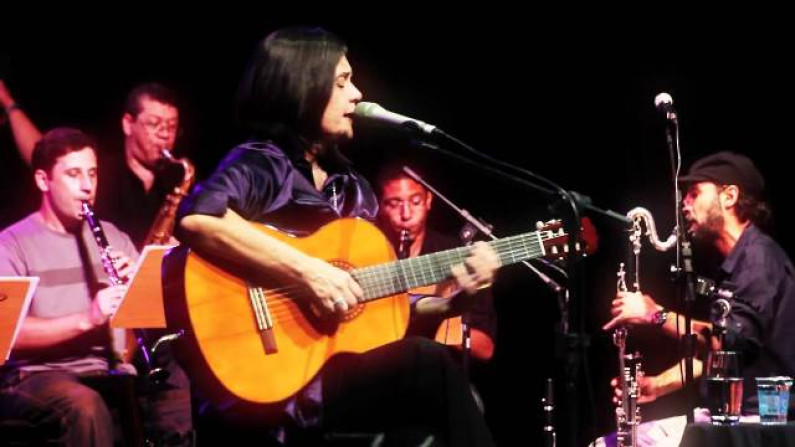 Joyce Silveira Moreno, commonly known as Joyce (Brazilian Portuguese) is a Brazilian singer/songwriter, as well as an accomplished guitarist and arranger. She was born in Rio de Janeiro on 31 January 1948. As of 2009, Joyce started using her full name, Joyce Moreno, for her future releases.

Joyce premiered in the late 60’s, and since then has recorded over 20 solo albums, and appeared in myriad records with such artists as Elis Regina, Toninho Horta, Vinicius de Moraes, and Yoko Kanno. In recent years she has collaborated extensively with João Donato. Much of Joyce’s work has been compared to the early boom of the jazz fusion scene in the United States.

She got her start in music by listening to her brother play the guitar, as well as listening to Ella Fitzgerald, Miles Davis and Billie Holiday for inspiration on emotions conveyed in music. Many people came into Joyce’s house, and she easily got swept up in the music scene, having had in her childhood great encouragement in music.

Joyce refers to her music as “MCB” (Creative Music of Brazil), rather than MPB. She has recorded many movie and TV soundtracks, and is creator and host of the music-infused television program “Cantos do Rio”.

She has also written a memoir, Fotografei Você na Minha Rolleyflex. In it, she discusses her experiences in the bossa nova and MPB movements, providing a fascinating portrait of fellow musicians, including João Gilberto.

She worked with Yoko Kanno in the Vol. 1 of the soundtrack of the anime Wolf’s Rain.

Joyce is married to drummer Tutty Moreno, who plays in her band. Two of her daughters (Clara Moreno and Ana Martins), from her marriage to Nelson Angelo are also singers.

In 2011, she collaborated with Madlib to contribute a version of the song “Generation Match: Banana” to the Red Hot Organization’s most recent charitable album “Red Hot+Rio 2.” The album is a follow-up to the 1996 “Red Hot + Rio.” Proceeds from the sales will be donated to raise awareness and money to fight AIDS/HIV and related health and social issues.