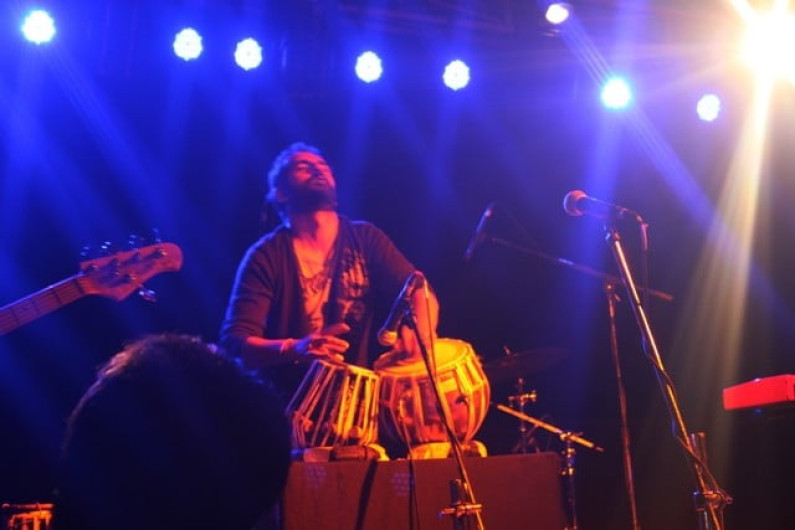 Karsh Kale  is an Indian American musician, producer and composer, and is considered one of the pioneering figures in defining the Asian Underground genre by mixing disparate genres of music such as Indian classical and folk with electronica, rock, pop and ambient music. In addition to production, remixing, and DJ work, Kale is known for his tabla drumming and film composition.

Born as Utkarsha Kale on November 1, 1974 to Indian Marathi speaking immigrants in West Bromwich, England, Kale was raised in Brooklyn, New York after his parents relocated in 1977.

Kale took an interest in drums and eventually became a tabla player. Kale’s father introduced Kale to a broad range of music, which included traditional Indian music, classical, rock, and even early hip-hop.

From this broad range of influences, Kale, who was self-taught, developed his own style, which eventually led to his “electric tabla”.

The album is considered to be one of the most influential Asian Fusion albums to date, and the group embarked on a tour, of which one of the shows was later released on DVD.

While a Music Production and Performance student at New York University, Kale began playing in bands and working as a session musician. In 1999, Kale began work on his first EP, Classical Science Fiction from India and began hosting bi-weekly “Futureproof” events, which consisted of DJ and electric tabla sets.

These events attracted the attention of San Francisco label Six Degrees Records. Soon after, Kale became the first Indo-American to be signed to a solo recording contract in the United States, a move which was followed by Kale’s first full-length album, Realize, in 2001.

Realize, often considered as a major milestone in what Kale called “Asian Massive”, was followed with 2002’s Asian Massive Tour, which also featured Midival Punditz and Cheb i Sabbah, and 2003’s Liberation.

The album Liberation was completely musical rather than the usage of lyrics, though a few songs were with lyrics. The great artist Zakir Hussain also was featured in the album and in the major attraction of the album “Milan”.

Kale’s third album, 2006’s Broken English, was predominantly set to English lyrics, a shift from his previous albums. His follow-up Breathing Under Water, released in 2007, was the result of a two-year collaboration with sitar instrumentalist Anoushka Shankar.

In 2011, Kale released Cinema, which is influenced by Kale’s experiences in composing for Bollywood. He also won GIMA Awards best fusion album for the same, beating A.R.Rahman.