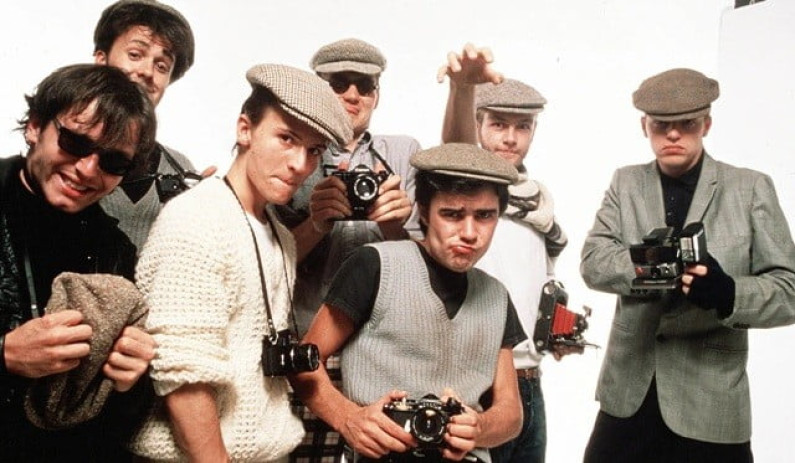 Madness are an English ska band from Camden Town, north London, who formed in 1976. One of the most prominent bands of the late-1970s and early-1980s two-tone ska revival, they continue to perform with six of the seven members of their classic line-up.

Madness achieved most of their success in the early to mid-1980s. Both Madness and UB40 spent 214 weeks on the UK singles charts over the course of the decade, holding the record for most weeks spent by a group in the 1980s UK singles charts. However, Madness did so in a shorter time period (1980–1986).

Madness have had 15 singles reach the UK top ten, which include “One Step Beyond”, “Baggy Trousers” and “It Must Be Love”, one UK number one single (“House of Fun”) and two number ones in Ireland, “House of Fun” and “Wings of a Dove”. “Our House” was their biggest US hit. In 2000 the band received the Ivor Novello Award from the British Academy of Songwriters, Composers and Authors for Outstanding Song Collection.

The core of the band formed as The North London Invaders in 1976, and included Mike Barson (Monsieur Barso) on keyboards and vocals, Chris Foreman (Chrissy Boy) on guitar and Lee Thompson (Kix) on saxophone and vocals.

They later recruited John Hasler on drums and Cathal Smyth (better known as Chas Smash) on bass guitar. Later in the year, they were joined by lead vocalist Dikron Tulane.

This six-piece line-up lasted until part way through 1977, when Graham McPherson (better known as Suggs) took over the lead vocals after seeing the band perform in a friend’s garden.Tulane went on to be an actor under the name Dikran Tulaine.

Smyth, who left after an argument with Barson, was replaced by Gavin Rodgers, Barson’s girlfriend’s brother. McPherson was kicked out of the band for too often choosing to watch Chelsea instead of rehearsing. Thompson left the band after Barson criticised his saxophone playing.

By 1978, the band had allowed McPherson to return, after filling in temporarily for Hasler (who had taken over vocals when McPherson was removed). Thompson returned after patching things up with Barson. Drummer Dan Woodgate (Woody) and bass player Mark Bedford (Bedders) also joined the band, replacing Garry Dovey and Rodgers, respectively.

After briefly changing their name to Morris and the Minorsthe band renamed itself as Madness in 1979, paying homage to one of their favourite songs by ska/reggae artist Prince Buster. The band remained a sextet until late 1979, when Chas Smash rejoined and officially became the seventh member of Madness as a backing vocalist and dancer.

2004–10: The Dangermen and The Liberty of Norton Folgate

In 2004, the band played a series of low-key concerts as The Dangermen, performing covers of classic reggae and ska songs. A lot of the songs were those played by the band when they were first forming and the band performed the songs as a celebration of their 25th anniversary.

This led to the release of the album The Dangermen Sessions Vol. 1 on V2 Records in August 2005. During the sessions which produced the album, in mid-2005, guitarist Chris Foreman announced his departure, citing “the petty, time consuming bollocks that goes on in the band” as his reason for leaving.

The band completed the album without him, and on release, it peaked at no. 11 in the UK album charts, which was the band’s highest studio album chart position in 21 years. Although two singles were released, neither was a major success in the UK.