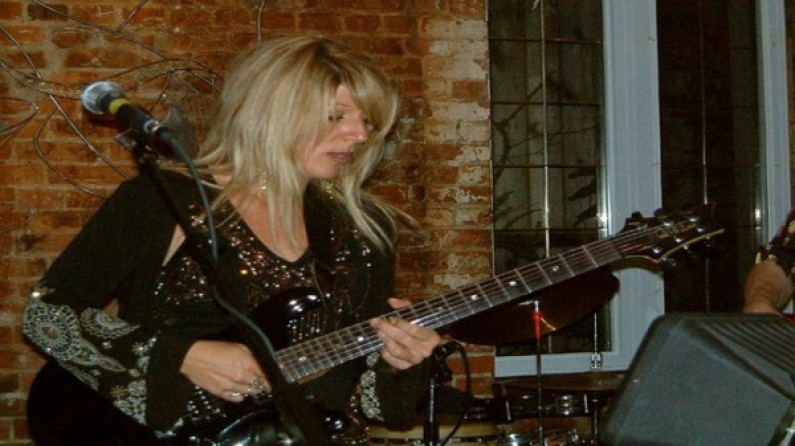 Maria Aurigema was born in Buffalo, NY. She is the youngest of four in a family of all boys. Aurigema means golden gem in Italian and there could not be a more fitting title for this talented artist.

Maria experienced an early exposure to life in the entertainment industry. Her multi-talented father, Jay Aurigema, owned a 30 room mansion in North Tonawanda, NY which became the stop-over for many artists and entertainers performing at Melody Fair in the 1970’s.

The DeGraff Mansion still contains a room where the walls are covered with signatures of these entertainers including Anna Marie Alberghetti, Donald O’Connor, Dean Jones, Sylvia Sydney, Martha Raye, John Raitt (Bonnie Raitt’s father) and scores of others. Though Maria was only a little girl at the time, she remembers the frequent late-night parties that filled the mansion.

Guitar took on a more serious nature for Maria, at the age of thirteen, with the discovery of Led Zeppelin and the late night blues shows on WBFO in Buffalo, NY.

Being one of the only girls in school who could really play the guitar provided a comfortable niche for Maria, and guitar playing quickly became her passion. Maria studied jazz with Buffalo guitarist, Stu Weissman and worked hard to master the complex jazz techniques.

She would argue with her mother to let her borrow the car so that she could go to the Central Park Grill in Buffalo where she would sit for hours to listen to the seductive fusion music of Gamalon (Teddy and Tommy Reinhardt, George Puleo, Bruce Brucato and Geoff Perry), and the heartfelt blues of the Black Cat Blues Band (John Brady and Willie Haddath and the Reinhardts).