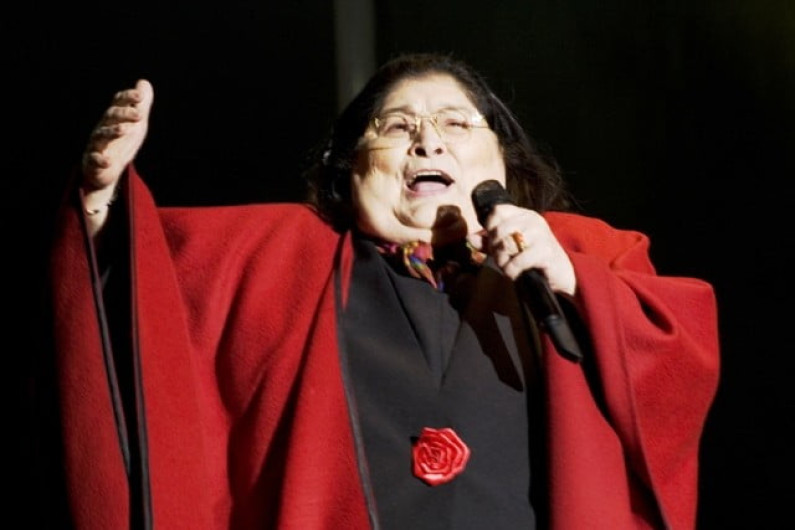 Haydée Mercedes Sosa ( 9 July 1935 – 4 October 2009), known as La Negra (literally: The Black Woman), was an Argentine singer who was popular throughout Latin America and many countries outside the continent. Curiously, she was born on Argentina’s Independence Day.

With her roots in Argentine folk music, Sosa became one of the preeminent exponents of nueva canción. She gave voice to songs written by Brazilian, Chilean and Cuban songwriters.

She was best known as the “voice of the voiceless ones”. Sosa performed in venues such as the Lincoln Center in New York City, the Théâtre Mogador in Paris and the Sistine Chapel in Vatican City, as well as sell-out shows in New York’s Carnegie Hall and the Roman Colosseum during her final decade of life.

Sosa was born on 9 July 1935, in San Miguel de Tucumán, in the northwestern Argentine province of Tucumán, of mestizo, French, and Diaguita Amerindian ancestry.

In 1950, at age fifteen, she won a singing competition organized by a local radio station and was given a contract to perform for two months.She recorded her first album, La Voz de la Zafra, in 1959.

A performance at the 1965 Cosquín National Folklore Festival—where she was introduced and brought to the stage while sitting in the audience by fellow folk singer Jorge Cafrune— brought her to the attention of her native countrypeople.