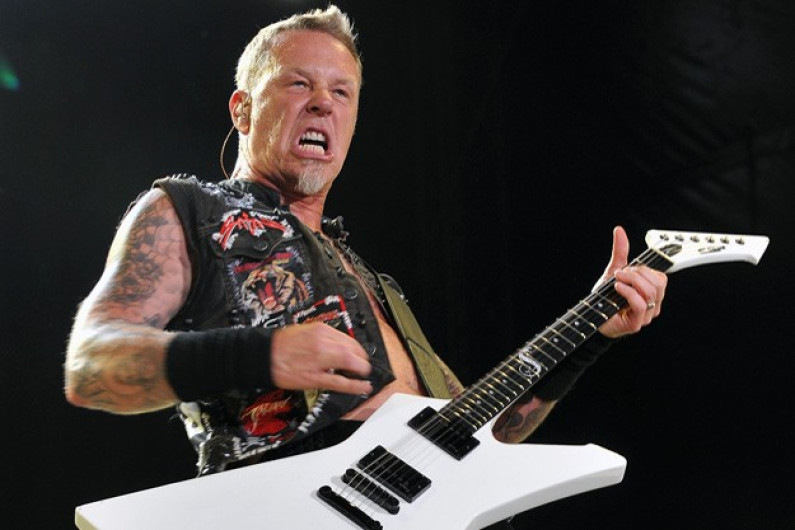 Metallica has released nine studio albums, four live albums, five extended plays, 26 music videos, and 37 singles. The band has won nine Grammy Awards and five of its albums have consecutively debuted at number one on the Billboard 200.

The band’s eponymous 1991 album has sold over 16 million copies in the United States, making it the best-selling album of the SoundScan Era. Metallica ranks as one of the most commercially successful bands of all time, having sold over 110 million records worldwide.

In 2012, Metallica formed the independent record label Blackened Recordings and took ownership of all of the band’s albums and videos. The band is currently in production of its tenth studio album, slated for a 2015 release.

Metallica has become one of the most influential heavy metal bands of all time, and is credited as one of the “big four” of thrash metal, along with Slayer, Anthrax, and Megadeth.

The band has sold more than 110 million records worldwide, including an RIAA-certified 66 million and Nielsen SoundScan-reported 53,642,000 in the U.S., making Metallica one of the most commercially successful bands of all time.

The writers of The Rolling Stone Encyclopedia of Rock & Roll said Metallica gave heavy metal “a much-needed charge”. Stephen Thomas Erlewine and Greg Prato of Allmusic said Metallica “expanded the limits of thrash, using speed and volume not for their own sake, but to enhance their intricately structured compositions”, and called the band “easily the best, most influential heavy metal band of the ’80s, responsible for bringing the music back to Earth”.

Jonathan Davis of Korn said he respects Metallica as his favorite band; he said, “I love that they’ve done things their own way and they’ve persevered over the years and they’re still relevant to this day.

I think they’re one of the greatest bands ever.” Godsmack drummer Shannon Larkin said Metallica has been the biggest influence on the band, stating, “they really changed my life when I was 16 years old—I’d never heard anything that heavy”.

Vocalist and guitarist Robb Flynn of Machine Head said that when creating the band’s 2007 album, The Blackening, “What we mean is an album that has the power, influence and epic grandeur of that album Master of Puppets—and the staying power—a timeless record like that”.

Trivium guitarists Corey Beaulieu and Matt Heafy said that when they heard Metallica they wanted to start playing guitar. Shadows of Avenged Sevenfold said touring with Metallica was the band’s career highlight, and said, “Selling tons of records and playing huge shows will never compare to meeting your idols Metallica”.

Kerrang! released a tribute album titled Master of Puppets: Remastered with the April 8, 2006, edition of the magazine to celebrate the 20th anniversary of Master of Puppets. The album featured cover versions of Metallica songs by Machine Head, Bullet for My Valentine, Chimaira, Mastodon, Mendeed, and Trivium—all of which are influenced by Metallica.

At least 15 Metallica tribute albums have been released. On September 10, 2006, Metallica guest starred on The Simpsons ’​ eighteenth season premiere, “The Mook, the Chef, the Wife and Her Homer”. Hammett’s and Hetfield’s voices were used in three episodes of the animated television series Metalocalypse.

A parody band named Beatallica plays music using a combination of The Beatles and Metallica songs. Beatallica faced legal troubles when Sony, which owns The Beatles’ catalog, issued a cease and desist order, claiming “substantial and irreparable injury” and ordering the group to pay damages. Ulrich, a fan of Beatallica, asked Metallica’s lawyer Peter Paterno to help settle the case.

On March 7, 1999, Metallica was inducted into the San Francisco Walk of Fame. The mayor of San Francisco, Willie Brown, proclaimed the day “Official Metallica Day”. The band was awarded the MTV Icon award in 2003, and a concert paying tribute to the band with artists performing its songs was held.