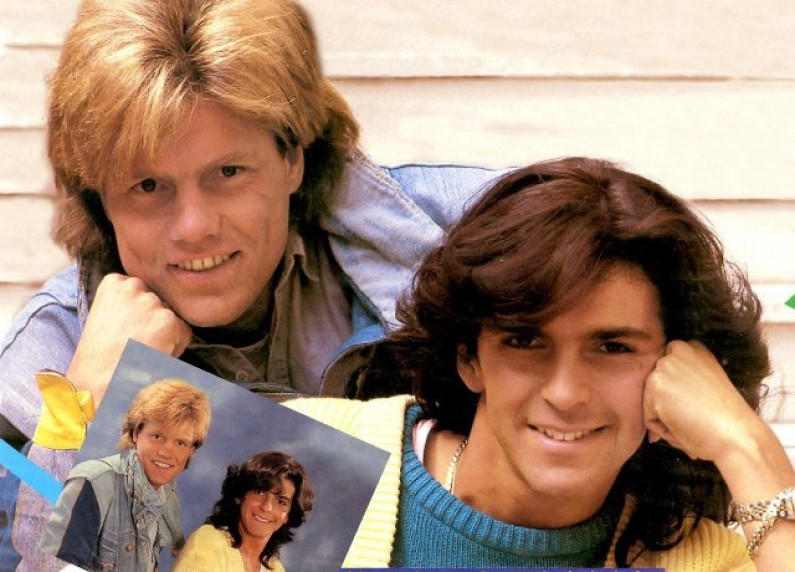 Modern Talking was a German Synthpop duo consisting of Thomas Anders and Dieter Bohlen. They have been referred to as Germany’s most successful pop duo, and have had a number of hit singles, reaching the top five in many countries.

Some of their most popular and widely known singles are “You’re My Heart, You’re My Soul”, “You Can Win If You Want”, “Cheri, Cheri Lady”, “Brother Louie”, “Atlantis Is Calling (S.O.S. for Love)” and “Geronimo’s Cadillac”.

The duo released singles which again entered the top ten in Germany and abroad. Some of those singles were “You’re My Heart, You’re My Soul ’98”, “You Are Not Alone” and “TV Makes the Superstar”.

First formed at the end of 1984, they unexpectedly became immensely popular with “You’re My Heart, You’re My Soul”, with which they occupied top ten positions in thirty-five countries including their homeland where the single perched at the top for six consecutive weeks, the single eventually went on to sell eight million copies worldwide.

The track was then followed by another number-one hit, “You Can Win If You Want”, which was released in the middle of 1985 from the debut album The 1st Album. The album was certified platinum in Germany for selling over 500,000 units.

Soon after their second hit, Modern Talking released the single “Cheri, Cheri Lady” which also quickly climbed to the top of the charts in Germany, Switzerland, Austria and Norway, meanwhile entering the top ten in Sweden and the Netherlands.

The single, being the only track released from their second album Let’s Talk About Love, managed to push the album to a platinum status in Germany for sales of over 500,000.

The success continued with two other number one singles such as “Brother Louie” and “Atlantis Is Calling (S.O.S. for Love)” both from the third album Ready for Romance. The duo also charted high with their sixth single “Geronimo’s Cadillac” from the fourth album In the Middle of Nowhere and “Jet Airliner” from their fifth album Romantic Warriors.

During this era, Modern Talking were successful in Europe, Asia, South America, Middle East, particularly in Iran, where all Western pop music was banned after the 1979 Islamic Revolution.