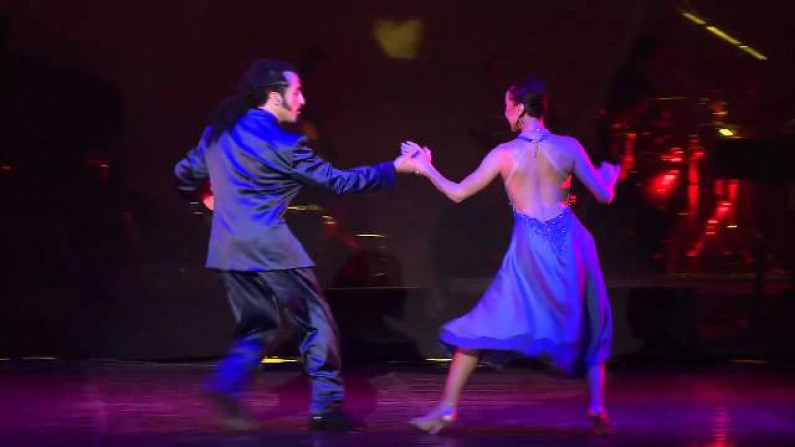 Pablo Veron  is a dancer Argentina ‘s tango , defined by the newspaper Liberation of Paris “the best dancer in the world.

With his group Tap 42 starts traveling around America, participating in numerous festivals of dance and Argentine television programs.

In 1988 he starred in Cipayos, Jorge Coscia. In 1989 he went to Paris with the show Tango Argentino, recognized as the spectacle par excellence that has brought art and grace with the essence of the tango in the world, and Tony Award winner.

In 1992 by the choreography of the show Mortadela Alfredo Arias-innovative magazine in which mingled dance, music and dialogues poetici-, Moliere Award winner for the best show of the year.

Again in collaboration with Arias, in 1994 and in 1995 worked as a dancer Pablo Veron tango dancer of tap dance and choreographer in Fous de Folies Folies Bergere.

Invited in 1996 to perform in the Gran Noche de Tango in Amsterdam and Les Trottoirs of Marsigli, she chooses as his dance partner director Sally Potter , who at that time was working with him for a film project.

The film was born the following year, Tango lessons, named best film of the International Film Festival of Argentina in 1997, saw Pablo Veron as an actor, dancer and choreographer. Thanks to this role in the film, Pablo Veron received SADAIC Prize for his work in spreading the Argentine national repertoire abroad.

In 1998 he won the American Choreography for Outstanding Achievement in Motion Pictures. In 2001, Pablo Veron dances in the film The Man Who Cried, Sally Potter, who was among the actors Johnny Depp , Cate Blanchett , John Turturro and Christina Ricci .

In 2002, between the dancers protagonists of the film Assassination Tango of Robert Duvall . In 2003, after a phase dedicated to teaching the tango in the most important tango festivals in the world, created and directed a show in Montreal, in which fuses tango with Argentine folklore, contemporary dance, tap dancing, music gypsy, salsa, flamenco and body percussion.

In June 2004 he creates the choreography of the show Tanghost -rappresentato for the first time at the National Theatre in Oslo, Norway and toured for more than two-years, where he also plays and dances.

Invited in 2005 to the Etoiles Gala in Montreal (festival that brings together the greatest dancers in the world), simultaneously dance and creates the choreography for two productions within the Cool Opera Festival in Stavanger, Norway.

In 2007 he was the choreographer, dancer and main actor of the Opera Carmen, directed by Sally Potter debuted English National Opera in London in October 2007.