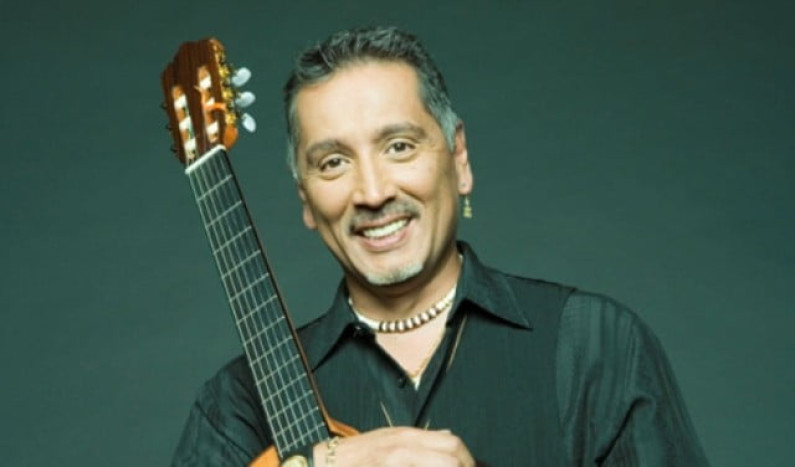 Oscar Lopez (born 1953 in Santiago, Chile) is a Chilean-Canadian master guitarist whose signature style combines fiery solos and Latin rhythms with Jazz and Pop sensibilities. Lopez moved to Canada, first to Winnipeg, Manitoba in 1979 and then in 1981 he settled in Calgary, Alberta.

He began pursuing music as a career, becoming a popular draw on the Canadian music festival circuit and released his debut album, Hola, in 1989. He started as an Independent recording artist and then joined the Narada label.

Many successful years with Narada produced four albums and numerous compilations. “Classical Soul” broke into the “Latin Charts” during its first few weeks and then came the very popular Guitar Greats featuring Oscar’s song “The Flavor”, as well as tracks by Ottmar Liebert, Strunz & Farah and many more.

Lopez took a break from recording and performing for two years to deal with depression. As a result, Spirit of the West recorded a tribute song to Lopez, “Come Back Oscar”, on their 2004 album Star Trails. On 24 July, Lopez appeared on stage with Spirit of the West at the Calgary Folk Music Festival to perform the song.

In 1997 Lopez began playing in a group known as Compadres, playing a style of music that was referred to as “Celtino”. This collaboration with longtime friend and Singer/Songwriter James Keelaghan resulted in a self-titled album that year (they later toured Australia in 2005).

In 2007 they recorded another album, ¿Buddy Where You Been? and toured extensively across Canada with Percussionist Raphael Geronimo and Bassist David Woodhead.

His next recording project was with Pavlo and Rik Emmett (lead guitarist from rock group, Triumph), known as P.R.O. The CD is called, Trifecta and it was released in 2009. This powerful and tuneful trio played 50+ live dates around North America in support of the CD.

Lopez released his latest recording Apasionado on 21 October 2014 as an independent artist.