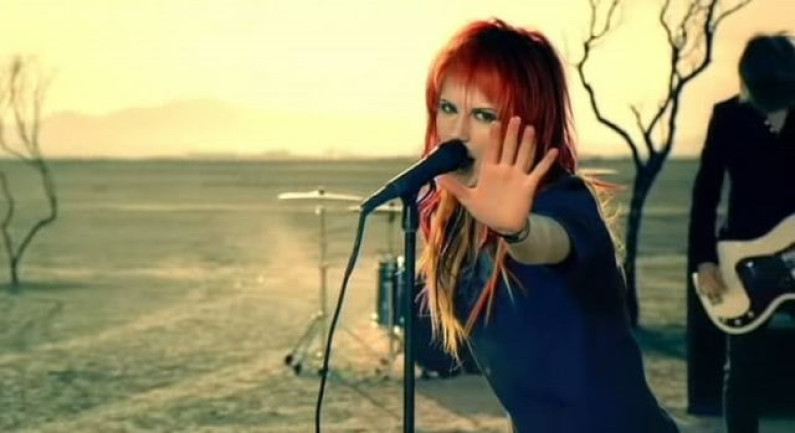 Paramore is an American rock band from Franklin, Tennessee, formed in 2004. The band currently consists of lead vocalist Hayley Williams, bassist Jeremy Davis, and guitarist Taylor York. The group released its debut album All We Know Is Falling in 2005, with the album reaching number eight on the UK Rock Chart and number thirty on Billboard‍ ’​s Heatseekers Chart.

The band’s second album, Riot!, was released in 2007. Due to the success of the singles “Misery Business”, “crushcrushcrush”, and “That’s What You Get”, Riot! was a mainstream success and was certified Platinum in the United States.

They then received a Best New Artist nomination at the 2008 Grammy Awards. Their 2009 follow-up, Brand New Eyes, is the band’s second-highest charting album to date, landing at number two on the Billboard 200 with 175,000 first week sales.

It produced the top-forty and Grammy-nominated single “The Only Exception”, and went platinum in Ireland and the UK, as well as gold in the US, Canada, Australia and New Zealand.

Following the departure of Josh and Zac Farro in 2010, the band released their self-titled fourth album in 2013. It gave the band their first career number one on the US Billboard 200 and was also the number one album in the United Kingdom, Ireland, Australia, New Zealand, Brazil, Argentina and Mexico.

It produced the hit singles “Still Into You” and “Ain’t It Fun”, with the latter winning the Grammy Award for Best Rock Song, making it Paramore’s first Grammy win.

In 2002, at age 13, vocalist Hayley Williams moved from her hometown Meridian, Mississippi to Franklin, Tennessee, where she met brothers Josh Farro and Zac Farro at a weekly supplemental program for home-schooled students.