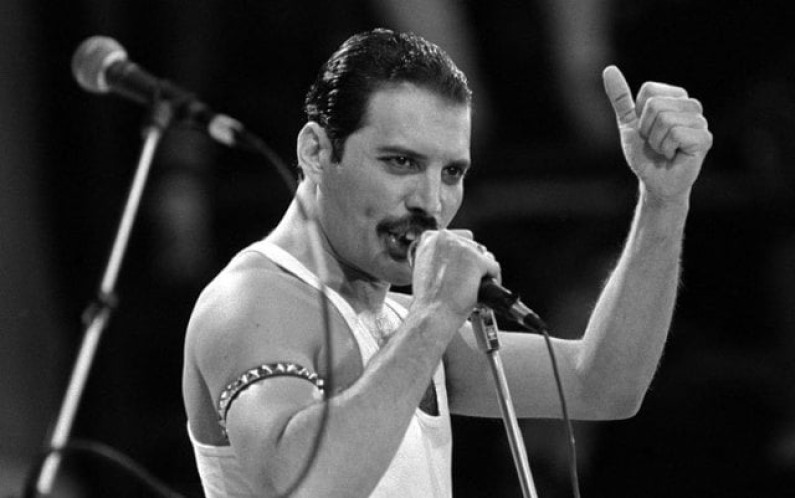 They received the Outstanding Contribution to British Music Award from the British Phonographic Industry in 1990, and were inducted into the Rock and Roll Hall of Fame in 2001.

Early days (1968–1974)
In 1968, guitarist Brian May, a student at London’s Imperial College, and bassist Tim Staffell decided to form a band. May placed an advertisement on the college notice board for a “Mitch Mitchell/Ginger Baker type” drummer; Roger Taylor, a young dental student, auditioned and got the job. The group called themselves Smile.

While attending Ealing Art College, Tim Staffell became friends with Farrokh Bulsara, a fellow student who had assumed the English name of Freddie.

Bulsara felt that he and the band had the same tastes and soon became a keen fan of Smile. In late 1970, after Staffell left to join the band Humpy Bong, the remaining Smile members, encouraged by Bulsara, changed their name to “Queen” and continued working together. When asked about the name, Bulsara explained, “I thought up the name Queen. It’s just a name, but it’s very regal obviously, and it sounds splendid. It’s a strong name, very universal and immediate. It had a lot of visual potential and was open to all sorts of interpretations. I was certainly aware of gay connotations, but that was just one facet of it.”

The band had a number of bass players during this period who did not fit with the band’s chemistry. It was not until February 1971 that they settled on John Deacon and began to rehearse for their first album. They recorded four of their own songs, “Liar”, “Keep Yourself Alive”, “The Night Comes Down” and “Jesus”, for a demo tape; no record companies were interested.

It was also around this time Freddie changed his surname to “Mercury”, inspired by the line “Mother Mercury, look what they’ve done to me” in the song “My Fairy King”. On 2 July 1971, Queen played their first show in the classic line-up of Mercury, May, Deacon and Taylor at a Surrey college outside London.

Having attended art college, Mercury also designed Queen’s logo, called the Queen crest, shortly before the release of the band’s first album. The logo combines the zodiac signs of all four members: two lions for Leo (Deacon and Taylor), a crab for Cancer (May), and two fairies for Virgo (Mercury).

The lions embrace a stylised letter Q, the crab rests atop the letter with flames rising directly above it, and the fairies are each sheltering below a lion. There is also a crown inside the Q and the whole logo is over-shadowed by an enormous phoenix.

The whole symbol bears a passing resemblance to the Royal coat of arms of the United Kingdom, particularly with the lion supporters. The original logo, as found on the reverse-side of the first album cover, was a simple line drawing but more intricate colour versions were used on later sleeves.

In 1972 Queen entered discussions with Trident Studios after being spotted at De La Lane Studios by John Antony and after discussions were offered a management deal by Norman Sheffield under Neptune Productions, a subsidiary of Trident to manage the band and enable them to use the facilities at Trident to record new material whilst the management search for a record label to sign Queen.

This suited both parties at the time as Trident were expanding into management and Queen under the deal were able to make use of the hi-tech recording facilities shared by bands at the time such as the Beatles and Elton John to produce new material. However Trident found it difficult to find a label for a band bearing a name with such connotation during the early 1970s.

In July 1973, Queen finally under a Trident/EMI deal released their eponymous debut album, an effort influenced by the heavy metal and progressive rock of the day. The album was received well by critics; Gordon Fletcher of Rolling Stone said “their debut album is superb” and Chicago’s Daily Herald called it an “above average debut”.

It drew little mainstream attention, and the lead single “Keep Yourself Alive”, a Brian May composition, sold poorly. Retrospectively, “Keep Yourself Alive” is cited as the highlight of the album, and in 2008 Rolling Stone ranked it 31st in the “100 Greatest Guitar Songs of All Time”, describing it as “an entire album’s worth of riffs crammed into a single song”. The album was certified gold in the UK and the US.

The group’s second LP, Queen II, was released in 1974, and features rock photographer Mick Rock’s iconic image of the band on the cover. This image would be used as the basis for the 1975 “Bohemian Rhapsody” music video production. The album reached number five on the British album chart and became the first Queen album to chart in the UK.

Aside from its only single, the album also included the song “The March of the Black Queen”, a six-minute epic which lacks a chorus. The Daily Vault described the number as “menacing”.

Critical reaction was mixed; the Winnipeg Free Press, while praising the band’s debut album, described Queen II as a “over-produced monstrosity”. Allmusic has described the album as a favourite among the band’s hardcore fans, and it is the first of three Queen albums to feature in the book 1001 Albums You Must Hear Before You Die.

The band drew artistic influence from other British rock acts at the time, such as the Beatles, Cream, Led Zeppelin, Pink Floyd, the Who, Black Sabbath, Slade, Deep Purple and David Bowie. Queen composed music that drew inspiration from many different genres of music, often with a tongue-in-cheek attitude.

The genres they have been associated with include progressive rock, glam rock, hard rock, heavy metal, pop rock, psychedelic rock, blues rock and dance/disco. Queen also wrote songs that were inspired by genres that are not typically associated with rock, such as ragtime, opera, gospel, vaudeville, and folk.

In 1963, the teenage Brian May and his father custom-built his signature guitar Red Special, which was purposely designed to feedback.Sonic experimentation figured heavily in Queen’s songs. A distinctive characteristic of Queen’s music are the vocal harmonies which are usually composed of the voices of May, Mercury and Taylor best heard on the studio albums A Night at the Opera and A Day at the Races.

Some of the ground work for the development of this sound can be attributed to their former producer Roy Thomas Baker, and their engineer Mike Stone. Besides vocal harmonies, Queen were also known for multi-tracking voices to imitate the sound of a large choir through overdubs.

For instance, according to Brian May, there are over 180 vocal overdubs in “Bohemian Rhapsody”. Many Queen songs were also written with audience participation in mind, such as “We Will Rock You” and “We Are the Champions”.

Queen have been recognised as having made significant contributions to such genres as hard rock, and heavy metal, amongst others. Hence, the band have been cited as an influence by many other musicians. Moreover, like their music, the bands and artists that have claimed to be influenced by Queen are diverse and span different generations, countries and genres, some of which include, heavy metal; Iron Maiden, Metallica, Dream Theater, and Anthrax, hard rock; Guns N’ Roses, Def Leppard, Van Halen, and Foo Fighters, glam rock; Mötley Crüe, and The Darkness, alternative rock; Nirvana, Radiohead, Trent Reznor, Muse, and The Smashing Pumpkins, pop rock; My Chemical Romance, pop; George Michael, Lady Gaga, and Katy Perry.

Queen have been cited as a major influence on the “neo-classical metal” genre by Swedish guitarist Yngwie Malmsteen. Metallica recorded a cover version of “Stone Cold Crazy”, which first appeared on the Rubáiyát: Elektra’s 40th Anniversary album in 1990, and won their first Grammy Award for Best Metal Performance in 1991.

In the early 1970s, Queen helped spur the heavy metal genre’s evolution by discarding much of its blues influence; the New Wave of British Heavy Metal in addition, they fused the music genre with a punk rock sensibility and an increasing emphasis on speed.

In 2002, Queen’s “Bohemian Rhapsody” was voted “the UK’s favourite hit of all time” in a poll conducted by the Guinness World Records British Hit Singles Book, and in 2004 the song was inducted into the Grammy Hall of Fame.

Acclaimed for their stadium rock, in 2005 an industry poll ranked Queen’s performance at Live Aid in 1985 as the best live act in history. In 2007, they were also voted the greatest British band in history by BBC Radio 2 listeners.

As of 2005, according to the Guinness Book of World Records, Queen albums have spent a total of 1,322 weeks (twenty-six years) on the UK Album Charts, more time than any other musical act.

Also in 2005, with the release of their live album with Paul Rodgers, Queen moved into third place on the list of acts with the most aggregate time spent on the British record charts.

In 2006, the Greatest Hits album was the all-time best-selling album in UK Chart history, with sales of 5,407,587 copies, over 604,295 more copies than its nearest competitor, the Beatles’ Sgt. Pepper’s Lonely Hearts Club Band. Their Greatest Hits II album is the seventh best seller, with sales of 3,746,404 copies.

Queen have sold over 150 million records, with some estimates in excess of 300 million records worldwide, including 34.5 million albums in the United States alone as of 2004.

In 2009, “We Will Rock You” and “We Are the Champions” were inducted into the Grammy Hall of Fame and the latter was voted the world’s favourite song in a global music poll.

Queen are one of the most bootlegged bands ever, according to Nick Weymouth, who manages the band’s official website. A 2001 survey discovered the existence of 12,225 websites dedicated to Queen bootlegs, the highest number for any band. Bootleg recordings have contributed to the band’s popularity in certain countries where Western music is censored, such as Iran.

In a project called Queen: The Top 100 Bootlegs, many of these have been made officially available to download for a nominal fee from Queen’s website, with profits going to the Mercury Phoenix Trust.Rolling Stone ranked Queen at number 52 on its list of the “100 Greatest Artists of All Time”, while ranking Mercury the 18th greatest singer and May the twenty-sixth greatest guitarist.