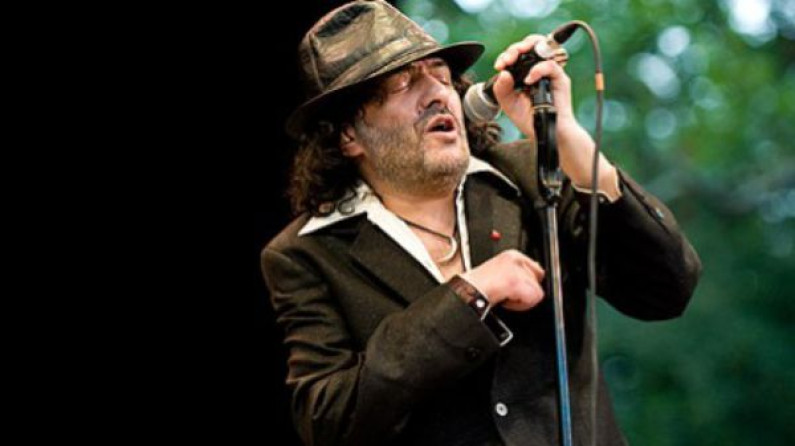 Rachid Taha (born September 18, 1958 in Sig, Algeria) is an Algerian singer and activist based in France who has been described as “sonically adventurous.” His music is influenced by many different styles such as rock, electronic, punk and raï.

Taha was born in 1958 in Sig (Mascara Province), Algeria, although a second source suggests he was born in the Algerian seacoast city of Oran. This town was the “birthplace of raï” music, and 1958 was a key year in the Algerian struggle for independence against French authority.

He began listening to Algerian music in the 1960s,including street-style music called chaabi. And music from the Maghreb region was part of his upbringing.

He moved with his parents to France when he was ten years old, settling in an immigrant community around the French city of Lyon in 1968. His father was a textile factory worker, with long hours and low pay, such that his life was compared to that of a “modern slave”, according to one account.

When 17, Taha worked during the day at a central heating plant, described as a “menial job”, and hated this work, but at night worked as a club DJ playing Arabic music, rap, salsa, funk and “anything else that took his fancy.”

The contrast between menial work during the day and fun during the night may have helped to develop his musical sensibility. In the late 1970s, Taha founded the nightclub called The Rejects or, in French, Les Refoulés, where he would spin mashups of Arabic pop classics over Led Zeppelin, Bo Diddley and Kraftwerk backbeats.

In 1989, Taha moved to Paris to launch his solo career. At one point he was invited to Los Angeles to record with musician Don Was, who had been a producer associated with the Rolling Stones. Taha mixed a variety of instruments and styles for his sound.

With a drum instrument called a doumbek or darbuka, his new group played Arabic-style beats. It appeared at one point that Taha might become an “overnight success”, but after the release of the album Barbès, sales were disappointing in the United States, possibly because Americans were not keen on Arabic-sounding music during the time of the first Gulf War.