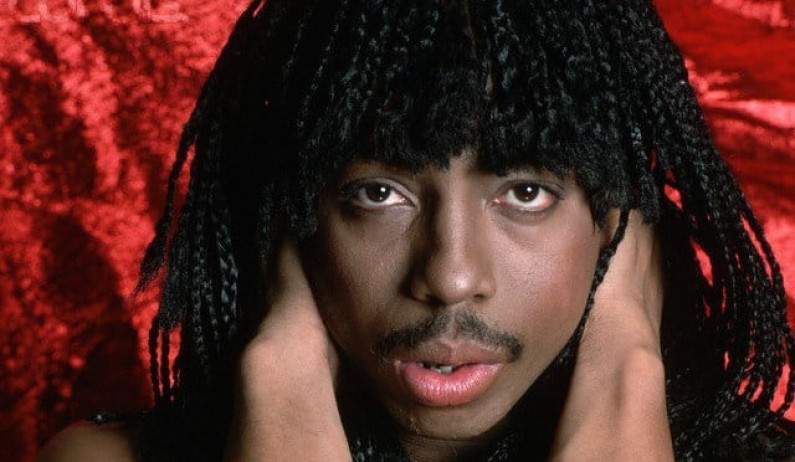 Influenced by singers such as Marvin Gaye and Smokey Robinson, James started singing in doo-wop and R&B groups as a teenager in his hometown of Buffalo, New York. After entering the U.S. Navy to avoid getting drafted, he deserted to Toronto, where he formed the rock and R&B band, The Mynah Birds, whose lineup once included Bruce Palmer, Neil Young, and Nick St. Nicholas.

James’ tenure with the group was interrupted after he was discovered recording with the group in Motown in 1966. Surrendering to military authorities, he served a one-year prison term.

Upon release, James moved to California to resume his duties with the Mynah Birds, although the group eventually split. James began a series of rock bands in California and worked with Motown under the assumed name “Ricky Matthews” as a songwriter.

In 1977, he signed with the Gordy Records imprint of Motown as a recording artist, releasing his debut, Come Get It!, in April 1978. The album sold over two million copies and launched his career into the mainstream as a funk and soul artist.

His most popular album, 1981’s Street Songs, launched him into superstardom thanks to the hit singles, “Give It to Me Baby” and “Super Freak”, the latter song becoming his signature song for the rest of his life, and the basis of MC Hammer’s biggest hit, “U Can’t Touch This”; James eventually sued for back royalties.

After being credited as writer of the song, James became the 1990 recipient of a Best R&B Song Grammy for composing the song. Due to this success, James was often called the “king of punk funk”, for his mix of funk, soul and underground-inspired rock music.

In addition to his own success, James emerged as a successful songwriter and producer for other artists, such as Teena Marie, The Mary Jane Girls, The Temptations, Eddie Murphy and Smokey Robinson.

An addiction to freebasing crack cocaine hampered his career by the late 1980s. In the 1990s, his legal troubles, which included kidnapping and torturing two women while under the influence of crack, led him to serve a three-year sentence at California’s Folsom State Prison.