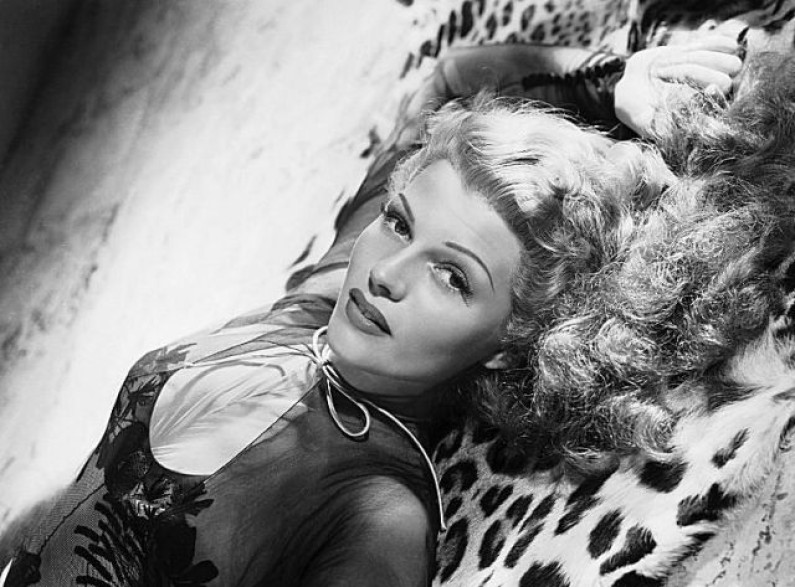 The press coined the term “love goddess” to describe Hayworth after she had become the most glamorous screen idol of the 1940s. She was the top pin-up girl for GIs during World War II.

Hayworth is perhaps best known for her performance in the 1946 film noir, Gilda, opposite Glenn Ford, in which she played the femme fatale in her first major dramatic role. Fred Astaire, with whom she made two films, called her his favorite dance partner.

Her greatest success was in the Technicolor musical Cover Girl (1944), with Gene Kelly. She is listed as one of the top 25 female motion picture stars of all time in the American Film Institute’s survey, AFI’s 100 Years…100 Stars.

In 1980 Hayworth was diagnosed with Alzheimer’s disease, which contributed to her death at age 68. The public disclosure and discussion of her illness drew international attention to Alzheimer’s, then a little-known disease, and helped to greatly increase public and private funding for Alzheimer’s research.

During her time at Fox, Hayworth was billed as Rita Cansino and appeared in unremarkable roles, often cast as the exotic foreigner. In late 1934 she performed a dance sequence in the Spencer Tracy film, Dante’s Inferno (1935) and was put under contract in February 1935.

She had her first speaking role as an Argentinian girl in Under the Pampas Moon (1935). She played an Egyptian girl in Charlie Chan in Egypt (1935) and a Russian dancer in Paddy O’Day (1935). Sheehan was grooming her for the lead in the 1936 Technicolor film, Ramona, hoping to establish her as Fox Film’s new Dolores del Río.

By the end of her six-month contract, Fox had merged into 20th Century Fox, with Darryl F. Zanuck serving as the executive producer. Dismissing Sheehan’s interest in Hayworth and giving Loretta Young the lead in Ramona, Zanuck did not renew Hayworth’s contract.