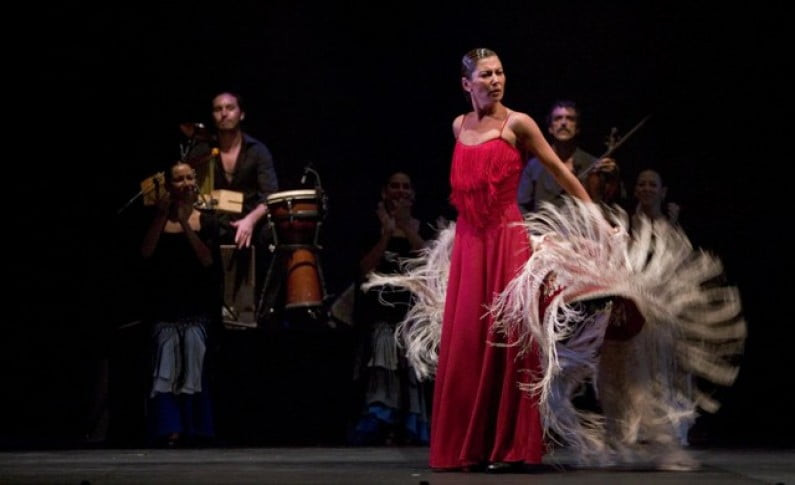 She is internationally famous and regularly tours the world. Sara Bara starts dancing at the age of eight in her mother’s (Concha Bara) dance school.

She was gaining a reputation when she joined guitarist Manuel Morao’s company in 1989.She has won a number of awards including the Madroño Flamenco of Montellano (Seville) in 1993 and in 1999 and 2001, she received a prize for the Best Female Spanish Dance Performer.

She collaborated with Javier Barón, and Merche Esmeralda included her in her show Mujeres. She worked with Antonio Canales on Gitano, and with El Güito at the Théâtre du Châtelet in Paris.She danced with Manuel Morao at the Seville Expo in 1992 and later in New York.

As a solo dancer, she took part in several tributes to Camarón de la Isla. In 1997, she started her own company, with which she closed the Festival Nacional de Cante de las Minas. The company’s first shows included Sensaciones (1998) and Sueños (show) (1999). Sara Baras appeared in other shows including Juana la Loca (2001) and Mariana Pineda (2002).

She has increasingly worked across all forms of media including television, film and the fashion catwalks. In 1998 she presented the programme Algo Más Que Flamenco on TVE. In July 1999, on the Patio of the Casa de Pilatos in Seville, she was filmed for Mission: Impossible II. As a model, she has appeared in the shows of Amaya Arzuaga at Fashion Week in London and for Francis Montesinos Madrid and Lisbon.

She also promoted an underwear collection by Triumph with other members of her dance company, and she was featured in a catalogue for Cartier.