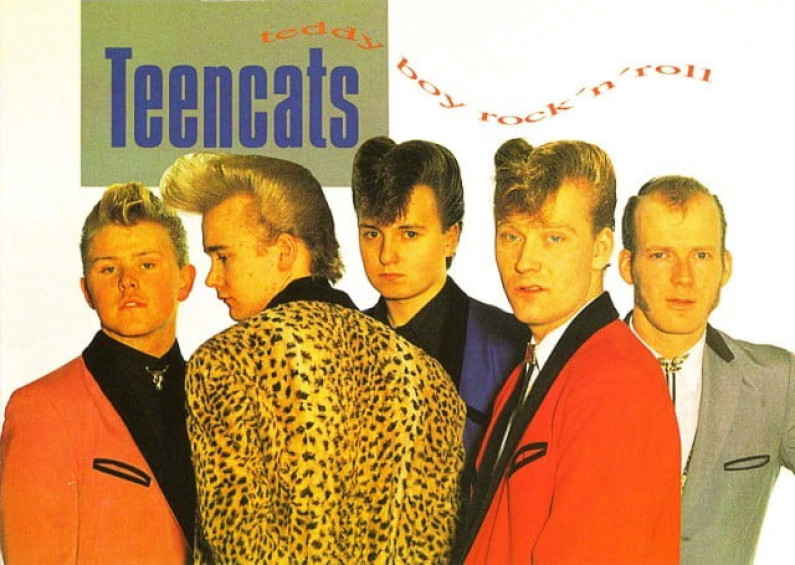 Teencats is a Norwegian rockabilly band from Hernes in Elverum Municipality. The band was started in 1984 by songwriter, singer and guitarist Stig Rune Reiten, his brother Stein-Erik Reiten on snare and Ove Marken on acoustic guitar. In the beginning it had no permanent bassist, but in 1986 came Esten Graff Rønningen into the band.

This crew recorded cassette Back To The 50’s With Rockabilly (Angel Records, 1986), that the following year was released on LP titled Teddy Bop by Dutch Rockhouse Records. In 1987 expanded Stein-Erik Reiten drum kit with cymbal and bass drum, Graff Rønningen was replaced by Steinar Øxseth on bass, and the spring joined Ove Marken.

In early summer came Anders Westhagen the band, and he and Stig Rune shared on tasks as a solo guitarist. The two began writing songs together, and later in the summer, the band went into the studio and recorded the album Cats’ Rhythm (released on Booze Records).

Plata meant new manager, multiple airings, TV appearance, and contract with Sonet Norwegian Gramophone. Late in 1988 the band went into the studio with producer Nils B. Kvam and pianist Lasse Hafreager to record their Sonet debut, named Teddy Boy Rock’n’Roll, and came out in August 1989.

In the meantime went Stig Rune Reiten over only to be a singer, so Ove Marken was re-recruited as full guitarist. In addition stopped Øxseth, and Mads Mikkelsen joined on bass.

At this time the band had around a hundred gigs a year, mostly in Norway (with a few longer laps north each year) but also in Sweden and Denmark.