The Budos Band – Ride or Die 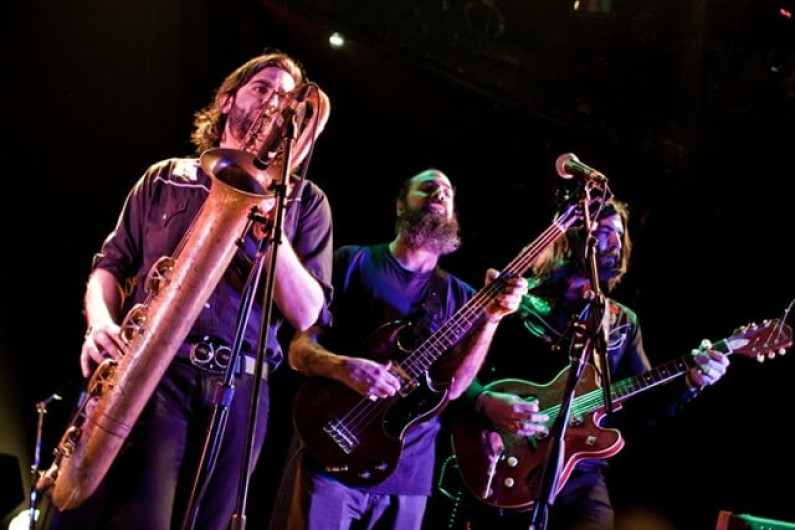 The Budos Band – Ride or Die

The Budos Band is an instrumental band recording on the Daptone Records label. The band has nine members (with occasional guests) who play instrumental music that is self-described as “Afro-Soul,” a term and sound which – in a 2007 interview – baritone saxophone player Jared Tankel elucidates as being drawn from Ethiopian music the band had been listening to that had a soul undercurrent to it, which the band then “sprinkled a little bit of sweet 60’s stuff on top” of.

Jazz, deep funk, Afro-beat, and soul influences can be heard in the Budos Band recordings, all of which were released on Daptone Records and recorded at the label’s own studio, Daptone’s House of Soul, in Brooklyn, New York.

Though they reside in Brooklyn The Budos Band have toured most of North America, Several countries in Eastern Europe and parts of Australia.

“Up From the South” is featured in a commercial for the NFL Network (2013).

“T.I.B.W.F.” is featured in a series of commercials for 1800 Tequila and in the sixth episode of This American Life.

“The Chicago Falcon (Remix)” is featured on Wale’s fourth mixtape, The Mixtape About Nothing (2008).

“Budos Rising” and “The Proposition” are featured in MLB 09: The Show and MLB 10: The Show, respectively, for PlayStation consoles.

“Mas o Menos”, “Ride or Die” and “Scorpion” are featured on the fictional radio station “Daptone Radio” in the game Sleeping Dogs by United Front Games and Square Enix London. (2012)

“The Volcano Song” is featured in the documentary I Knew It Was You: Rediscovering John Cazale (2009).

“The Sticks” is featured in the background of a trailer for Destiny’s Dark Below DLC. (2014)