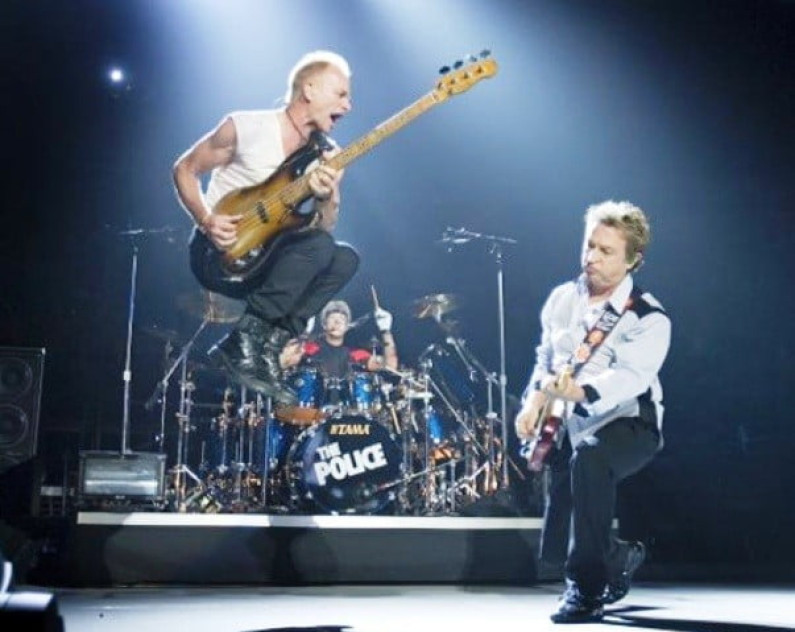 The Police were an English rock band formed in London in 1977. For the majority of their history, the band consisted of Sting (lead singer, bassist and principal songwriter), Andy Summers (guitarist) and Stewart Copeland (drummer).

The Police became globally popular in the late 1970s and are generally regarded as one of the first new wave groups to achieve mainstream success, playing a style of rock that was influenced by punk, reggae, and jazz.

They are also considered one of the leaders of the Second British Invasion of the U.S. They disbanded in 1986, but reunited in early 2007 for a one-off world tour that ended in August 2008. Their 1978 debut album, Outlandos d’Amour, reached No. 6 in the UK, and their second album Reggatta de Blanc became the first of five consecutive UK No. 1 albums.

Synchronicity from 1983 was No. 1 in both the UK and U.S., and sold over 8 million copies in the U.S. The Police have sold over 75 million records, making them one of the world’s best-selling artists of all time. They were the world’s highest-earning musicians in 2008, thanks to their reunion tour.

The band has won a number of music awards throughout their career, including six Grammy Awards, two Brit Awards—winning Best British Group once, an MTV Video Music Award, and in 2003 were inducted into the Rock and Roll Hall of Fame.

In late November 1976, while on tour in Newcastle upon Tyne in north east England with the British progressive rock band Curved Air, the band’s American drummer Stewart Copeland met and exchanged phone numbers with an ambitious singer-bassist (and former schoolteacher) called Sting (so named due to his habit of wearing a black and yellow striped jersey mirroring a bee), who at the time was playing in a jazz-rock fusion band called Last Exit.