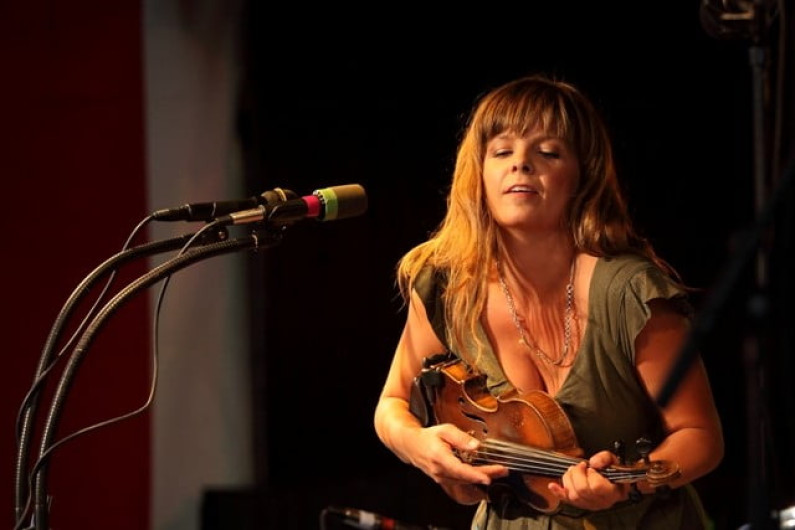 Nine years later, she left the band. Since then, Andersson has performed and recorded with several well-known New Orleans musicians, including Allen Toussaint, The Neville Brothers, The Meters and Betty Harris.

In 2007, she accepted an invitation to participate in Goin’ Home: A Tribute to Fats Domino, where she performed “When The Saints Go Marching In” with The Preservation Hall Jazz Band.

Andersson has performed Late Night with Conan O’Brien and The Late Late Show with Craig Ferguson, and has been a performer at the Voodoo Festival in New Orleans.

Inspired by a one-man-puppet-show (Blair Thomas, Chicago), in which the puppeteer played multiple characters and the drums, Andersson overcame the financial impracticality of touring Europe with a band by learning to play with a loop pedal.

She began by looping just her violin, voice, and guitar. Wanting to create a richer sound live, however, she began thinking about adding another loop pedal and more instruments. As a result, Andersson currently travels with two loop pedals, which she uses simultaneously, along with her record player, drums, dulcimer, guitar, and violin.

Andersson’s idea for her most recent Basin Street Records release was borne while touring Sweden, when she met with producer Tobias Froberg.

With little prodding, like-minded Tobias flew to New Orleans in the fall of 2007, where the two recorded Hummingbird, Go! in Andersson’s kitchen.

Andersson played most of the instruments on the album, with exception on two duets: one with New Orleans producer Allen Toussaint, and the other with Norwegian Singer Ane Brun. The album was mixed by Linus Larsson (Peter, Bjorn and John, Mercury Rev).

Live at Le Petit contains an extended set of old and new music, including some exclusive, never-before-seen material. In addition to her original music, the DVD features Andersson’s renditions of traditional American folk songs as well as a duet with famed New Orleans music legend Allen Toussaint.