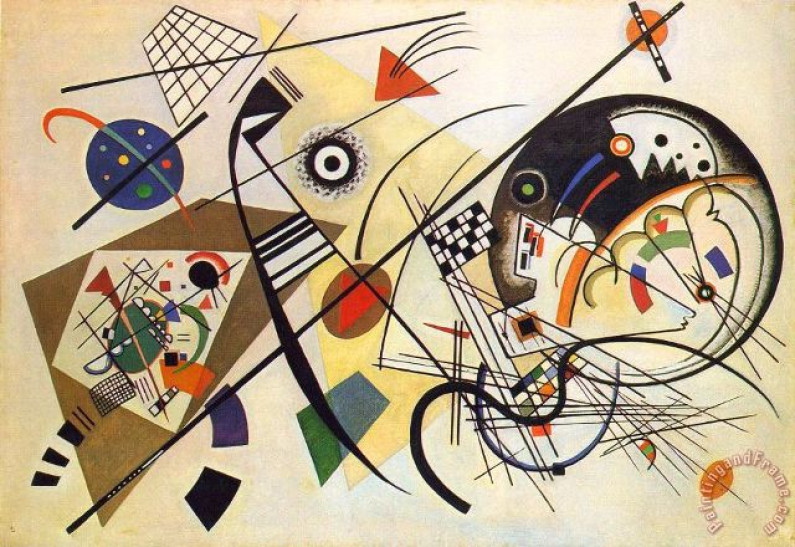 Kandinsky is generally credited as the pioneer of abstract art. Born in Moscow, Kandinsky spent his childhood in Odessa, where he graduated at Grekov Odessa Art school.

In 1896, Kandinsky settled in Munich, studying first at Anton Ažbe’s private school and then at the Academy of Fine Arts. He returned to Moscow in 1914, after the outbreak of World War I.

Following the Russian Revolution, Kandinsky “became an insider in the cultural administration of Anatoly Lunacharsky” and helped establish the Museum of the Culture of Painting.However, by then “his spiritual outlook… was foreign to the argumentative materialism of Soviet society” and opportunities beckoned in Germany, to which he returned in 1920.

There he taught at the Bauhaus school of art and architecture from 1922 until the Nazis closed it in 1933. He then moved to France, where he lived for the rest of his life, becoming a French citizen in 1939 and producing some of his most prominent art. He died in Neuilly-sur-Seine in 1944.

Kandinsky’s creation of abstract work followed a long period of development and maturation of intense thought based on his artistic experiences. He called this devotion to inner beauty, fervor of spirit, and spiritual desire inner necessity[citation needed]; it was a central aspect of his art.

Youth and inspiration (1866–1896)
Kandinsky was born in Moscow, the son of Lidia Ticheeva and Vasily Silvestrovich Kandinsky, a tea merchant. One of his great grandmothers was a Princess Gantimurova, probably explaining the “slight Mongolian trait in his features”. Kandinsky learned from a variety of sources while in Moscow.

He studied many fields while in school, including law and economics. Later in life, he would recall being fascinated and stimulated by colour as a child. His fascination with colour symbolism and psychology continued as he grew. In 1889, he was part of an ethnographic research group which travelled to the Vologda region north of Moscow.

In Looks on the Past, he relates that the houses and churches were decorated with such shimmering colours that upon entering them, he felt that he was moving into a painting. This experience, and his study of the region’s folk art (particularly the use of bright colours on a dark background), was reflected in much of his early work.