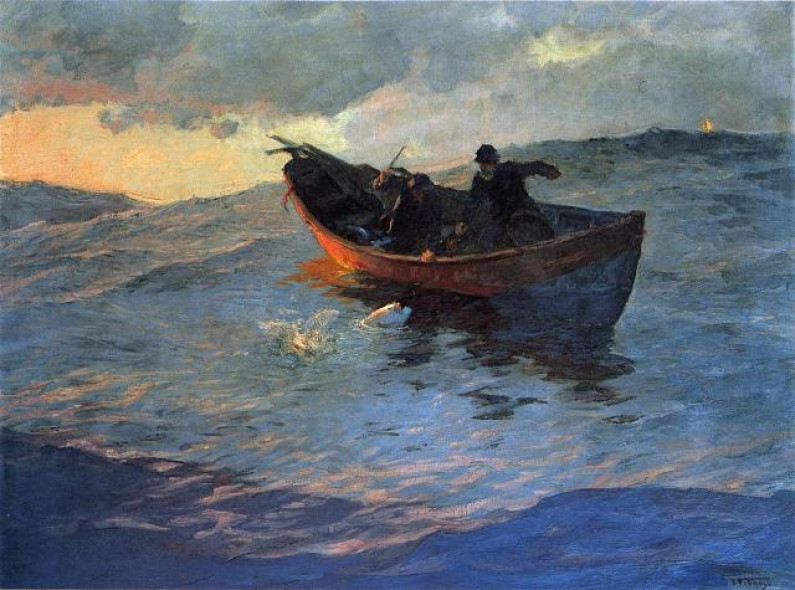 Willard Leroy Metcalf (July 1, 1858 – March 9, 1925) was an American artist born in Lowell, Massachusetts. He studied at the School of the Museum of Fine Arts, Boston, and later attended Académie Julian, Paris.

After early figure-painting and illustration, he became prominent as a landscape painter. He was one of the Ten American Painters who in 1897 seceded from the Society of American Artists. For some years he was an instructor in the Women’s Art School, Cooper Union, New York, and in the Art Students League, New York.

In 1893 he became a member of the American Watercolor Society, New York. Generally associated with American Impressionism, he is also remembered for his New England landscapes and involvement with the Old Lyme Art Colony at Old Lyme, Connecticut and his influential years at the Cornish Art Colony.

Born into a working-class family, Metcalf began painting in 1874. In 1876 he opened a studio in Boston, and received a scholarship at the Boston Museum school, where he studied until 1878. In 1882 he held an exhibition at the J. Eastman Chase Gallery in Boston, the sales from which financed a study trip abroad.

Metcalf left for Europe in September 1883, and did not return to the United States until late 1888. During that time he traveled and painted, studying first in Paris with Gustave Boulanger and Jules-Joseph Lefebvre, subsequently going to England and Pont-Aven, Brittany.

In the winter of 1884 he apparently met John Twachtman in Paris, and painted at Grez-sur-Loing alongside other American artists, including Theodore Robinson. His landscapes at this time were traditional renditions of peasant scenes, in the manner of Jean Millet.

By 1886 Metcalf was painting in Giverny, evidently the first American painter to visit there. Soon thereafter he traveled to Algeria and Tunisia, returning to Giverny in the summers of 1887 and 1888, in the company of other American painters.

Upon his return to the United States Metcalf had a solo exhibition at the St. Botolph Club in Boston. After living briefly in Philadelphia, in 1890 he opened a studio in New York, working for several years as a portrait painter, illustrator and teacher.

In 1895 he painted at Gloucester, Massachusetts, and ceased to work as an illustrator. In the late 1890s he appears to have painted little, and his contributions to the first few exhibitions of The Ten were disappointing. At the time Metcalf led a lavish social life that included heavy drinking.